Posted at 21:19h in Addresses by St Philip's Seminary, Toronto 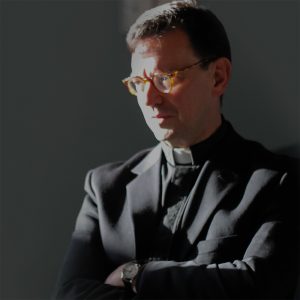 Fr Derek Cross gave the following homily at the Mass:

For a commencement to take place, a course of studies must be finished. If today you are sent away from the protecting walls of our alma mater, this new beginning, as you well know, piggy-backs on your recent, hard-won accomplishment. So, looking back, even to the battery of comprehensive exams last week, we already begin to indulge in nostalgia. Memory, as some of you will have learned from Husserl, is structurally tinged with nostalgia, “a wistful desire to return in thought or in fact to a former time in one’s life, to one’s home or homeland, or to one’s family and friends.” But we do not need Husserl’s subtle analyses to appreciate memorial nostalgia. The ancient poet Virgil, singer of human tears and the obstacles that accompanied the foundation of the city of Rome , knew well the bittersweet psychology of passage. All classicists remember the beautiful words from book I, line 203 of Virgil’s Aeneid: “forsan et haec olim meminisse juvabit.” Trying to console the rump of his troops shipwrecked on the shores of Carthage , Aeneas tentatively suggests, “A joy it will be one day, perhaps, to remember even this.” Robert Fagles, a recent Englisher of the Aeneid, pointed to this passage as most resistant to the translator’s art: “It is about loss, about overcoming the worst,” he said, “but the word ‘perhaps’ is important. It may not be a joy to remember.”

It is, of course, my hope that your own struggles in the seminary, whether epic or not, will prove to be, from tonight forward, a joy to remember. But if even Aeneas, trying to encourage his men, left the matter in doubt, can we do any better? Are we not all left quivering, anxious about the issue of our efforts? Surely it was not always easy for you, reading difficult texts, considering unfamiliar problems, exercising new skills, perhaps speaking and writing a foreign language, even staying awake in a stuffy classroom. Nor was it easy for us, trying (as Kant put it) to wake you from your dogmatic slumbers, to encourage you to marshal your thoughts with rigor, to interpret your silences, to exonerate your indifference at times to the greatness of our heritage. And yet, just as Aeneas could not found the city of Rome without self-discipline, sacrifice, and suffering, neither could we have established our community of learning without such attendant negativities. I would have to admit that clicking from one website to another, as the impulse takes you, is an even more gratifying form of recreation than flipping television channels. (For one thing the ratio of websites to syndicated TV stations seems closely to approximate infinity to one, which promises at least quantitative superiority.) But there is no substitute for literacy, for trying to read and trying to think. And that entails effort, failure, and frustration.

So are all of us necessarily disquieted in the face of the great “perhaps” which our future remembrance is to bring? Will you come to think you have wasted your time by studying here? Will we come to fear we have wasted our time with you? Or are there conditions under which we can begin to exorcise Virgil’s “perhaps” which seems to rule our future? Can we somehow begin to take undeniable joy in all that we have been through together?

Fourteen years ago, the then Cardinal Josef Ratzinger was speaking at Rimini about Platonic nostalgia. He first reminded his hearers of Plato’s Phaedrus. ‘Plato contemplates the encounter with beauty as the salutary emotional shock that makes man leave his shell and sparks his “enthusiasm” by attracting him to what is other than himself. Man, says Plato, has lost the original perfection that was conceived for him. He is now perennially searching for the healing primitive form. Nostalgia and longing impel him to pursue the quest; beauty prevents him from being content with just daily life. It causes him to suffer. In a Platonic sense, we could say that the arrow of nostalgia pierces man, wounds him and in this way gives him wings, lifts him upwards towards the transcendent.’ According to Ratzinger, Plato teaches that beauty is ultimately redemptive, as well as a cause of suffering. We might think, then, that whenever we discern a beautiful pattern in our deeds and sufferings we are borne above these experiences and can hope to transcend our misery. This gives us a name that Virgil had not pronounced—beauty—but how far does it advance us beyond Virgil’s understanding of happy memory? Ratzinger continues his reading of Plato: ‘it is obvious that the souls … are thirsting for something other …. But the heart cannot express this “other” thing, “it has only a vague perception of what it truly wants and wonders about it as an enigma”.’ Wonder is probably better than anxiety, but Ratzinger also has, as you might suspect, another string to his bow.

Still on the topic of beauty, Ratzinger recalls a ‘question that interested the Fathers of the Church’, whether or not Christ was beautiful. Now you might be tempted to think this an idle question, at any rate an unanswerable one, owing to the vagaries of human taste. But Ratzinger is not so easily put off and shows what is at stake. ‘Implicit here is the more radical question of whether beauty is true or whether it is not ugliness that leads us to the deepest truth of reality.’ We may be able to blink away the first, perhaps superficial, formulation ‘whether Christ was beautiful’. But the more radical question whether it is not ugliness that leads us to the deepest truth of reality had been forcefully put by Nietzsche, as Ratzinger well knows. Nietzsche suggested that, in fact, the truth is obscene. Our materialist contemporaries are more boring, but not much better. How much beauty is found in a mindless whirl of atoms irretrievably submerged in a void? Ratzinger has an answer to the question he has posed—a thoughtful answer, not a polemical taunt. ‘Whoever believes in God, in the God who manifested himself, precisely in the altered appearance of Christ crucified as love “to the end,” knows that beauty is truth and truth beauty; but in the suffering Christ he also learns that the beauty of truth also embraces offence, pain, and even the dark mystery of death, and that this can only be found in accepting suffering, not in ignoring it.’

For Christ’s work, as theologians say, has a kenotic, a self-emptying, character. In becoming man, he willingly abandoned the divine glory, the rights he enjoyed as God, and embraced the agony of the cross, the descent into hell. Christ declared that he had come not to do his own will or to testify to himself but to fulfil the will of the one who sent him. Yesterday we celebrated the coming of the Holy Spirit at Pentecost, and there the kenotic pattern is also verified. The Holy Spirit followed the same descending path as Christ. Not content to remain enthroned on high, he came down on the Apostles and comes down again for us in every sacramental mystery. When he descends the Spirit reveals, not his own face, but the face of Christ and the face of the holy people of God. The self-emptying missions of the Son and the Spirit reveal to us that God is a community of persons united in non-grasping, self-emptying love.

Towards the end of Georges Bernanos’ novel, The Diary of a Country Priest, a young curé, conscious of the weakness, the ineffectiveness, the failure his life has been, writes in his journal, ‘How easy it is to hate oneself! True grace is to forget. Yet if pride could die in us, the supreme grace would be to love oneself in all simplicity—as one would love any one of those who themselves have suffered and loved in Christ.’

True grace is to forget. No one remembered to quote that at his oral exam. But at this level one might just as well say that true grace is to remember, with more than Virgilian anticipation, indeed with faith’s assurance, that ‘the beauty of truth also embraces offence, pain, and even the dark mystery of death … accepting suffering, not … ignoring it.’

Remembering with joy the beauty of these past years does not mean ignoring your struggles and difficulties, nor do these unseemly things annul the dignity of your achievements—and ours. I hope you will be able to remember that and so speak of these years kindly, as we already begin to speak fondly of you.