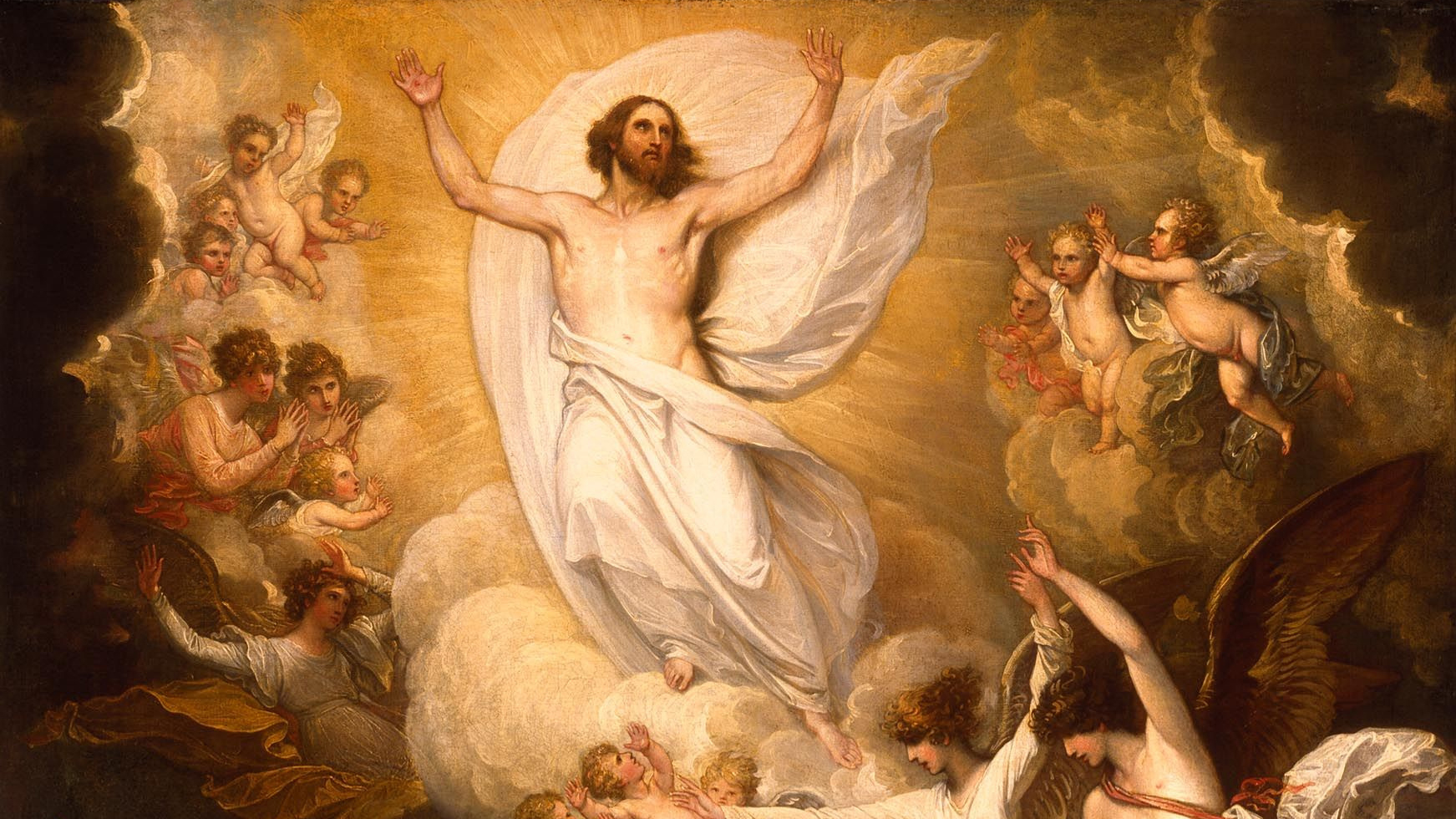 24 Aug Reflections on the Ascension

Posted at 16:15h in Reflections by St Philip's Seminary, Toronto

It is in the wake of the Ascension that we always and everywhere awake and find ourselves. The liturgy expresses this, since it is the Ascended Christ who acts liturgically and to Whom, liturgically, we turn. But the Ascension itself conditions more than our liturgical life; it conditions our life as such. Humanity exists, everyone lives and acts, in a world which the Ascension alone defines and interprets; always in its wake, the world means only what the Ascension shows.

And of course in one way what the Ascension shows is, quite literally, nothing. It is the event par excellence of withdrawal and of absence. This absence contains ­- and can also sanctify -­ every other experience we have of something or someone missing. When the Incarnate Word ascends, the world in a certain way loses Him, and He, in a certain way, loses the world. Everything else we can lose finds a home and a meaning in this, Divine-human, way of loss. In the Ascension the Word made flesh and the flesh of the world become absent to each other. The Ascension should therefore be the Patron Feast of our human experiences of bereavement ­- of times, of places, of things and of each other. For in the Ascension, God has lived through these experiences, as He lives through everything human, taking us to Himself, letting Himself be nailed to us, so as to heal and transform the flesh, making it become, in a new way, what it always was, from the beginning ­ His own.

But still ­- the horizon of meaning which the Ascension has fashioned for us is, unavoidably, something negative -­ even if, in a further stage, this negativity is transformed. Because of the Ascension, the Word made flesh no longer situates Himself among the flesh of the world. He no longer dwells among us as we desire to dwell with each other, face to face, flesh to flesh. The Incarnate Word, we believe, is the reason of the world; but in the Ascension the reason of the world, unearthed or discovered in the Incarnation, is un­-earthed in a new sense, one seemingly opposed, even contradictory, to the first: for by the Ascension the world’s reason is uprooted and, returning to His Father, He seems to become, for us, other­-worldly.

Now these ways of speaking are, I think, true -­ and we perhaps need to dwell at greater length than usual, and more deeply, on the meaning of the Ascension as a kind of loss ­- even, at first sight, a kind of reversal of the Incarnation. But although true, and important, such a line of thought is also only provisional. What -­ again -­ does the Ascension mean? It means that the world cannot be with Christ as the world naturally desires to be; it means that Christ does not give Himself to the world as the world would naturally ask or even demand. But perhaps that is the whole point.

We instinctively want our being with each other to take form in a certain way. Think of Mary Magdalene in the garden, in the moment when the Risen Christ manifests Himself to her, in a wholly unprecedented and inexpressible way. At once she seeks to convert this manifestation, to transpose it into terms she already knows. She desires to be with Him by trying to change Him into a body she can cling to, thereby trying to ensure, if she can, that He will be present to her as He was before. But can she? No -­ He will not show Himself to her in that way. He has been bodily present to her all along, since the first moments of their encounter, but somehow, despite His bodily presence, she does not recognize Him; it is, in the end, only His voice, His call, that manifests Him to her. But how instinctively, how naturally, she tries -­ literally -­ to grasp the Resurrection, as if it were nothing but the renewal of a familiar presence, a reassuring return to the measurable here and now after the temporary obscurity of death and burial. Mary wants to banish absence, and to fill it with the only kind of presence that she knows.

But after pronouncing her name, what does Christ say to her? Noli me tangere -­ do not hold me. Why does He say this? Because, He explains, I have not yet ascended to the Father. Now what do these mysterious words mean?

We should first recall the manifest negativity of His impending absence. This is already hinted at in the enigmatic and elusive quality of the Resurrection appearances themselves, including this one to Mary in the garden; it is rendered definitive in the Ascension. Now the whole intangibility of this way of presence and absence is not so much a matter of first one and then the other. Instead presence and absence seem to be simultaneous and to interpenetrate: in the garden He is present to Mary in His body -­ He is there before her, she is speaking to Him -­ but at the same time absent to her recognition -­ at least, until He speaks her name, which then indeed manifests His presence to her, but at the very moment in which a bodily absence is imposed by His repudiation of her touch. So what is going go?

But there is more to it than that, something by which He leads us beyond mere resignation to the negativity of absence. In His words to Mary, He means also that she must not try to hold onto Him in the way she desires, but must instead await learning how to hold onto Him in an entirely new way, which she will not begin to see until His absence is made definitive: for it is only in the light -­ or obscurity -­ of that absence that she can be taught this new presence and live it out.

It is, then, as if He says to her: Do not hold onto me as you now desire to, because such desires are destined to pass away. They will pass away first in the negativity of my absence, once I have ascended to the Father; and then, afterwards, they will pass away into something else, in a transformation in your understanding of what it means to touch me and be touched by me: such a transformation will come, but it is possible only by way of the absence which denies the presence you crave.

There is, then, an absence which denies the presence we crave. But this absence is in fact a kind of sustaining architecture, it is the persisting form that makes possible another and entirely unique kind of presence. This new presence passes beyond the possession of Christ as object, even a sacred object, held fast before us as Mary Magdalene desired to hold Him fast, compelling Him, as it were, to be real according to what is finally a very impoverished conception of reality. Getting beyond this, living with the manifest absence of Christ as object, is the condition for receiving His presence as the gift of the Spirit.

There is an astonishing passage in St Paul which takes us to the heart of this. He who came down is the same One who went up, St Paul tells us -­ the same One who went up, above and beyond the heavens, so as to fill the whole universe with His presence. In St Paul’s vision of this, it is as if the Ascension liquefies the objective presence of Christ in the world -­ His being here or there, fascinating us as a presence we can grasp -­ and gives Him to us, instead, as the very life of things themselves. This liquefaction is the inconceivably generous and transforming self­offering of His love. No wonder He tells Mary not to hold onto Him in the old way. It is as if, starting from the Ascension, His life is offered to us as passing entirely into our own – as His Eucharistic Body and Blood pass entirely into us in communion, and are given to us only so that they may pass in this way, from sacred object to indwelling life. Starting from the Ascension, He offers Himself as a presence that fills us, and the whole universe, from within.

Christ speaks of the Counsellor, whom I will send to you from the Father, even the Spirit of Truth, who proceeds from the Father, [and who] will bear witness to me. Now what witness to Christ does the Spirit bear? He bears forms of witness which make possible Christian life as such. And to speak of the Christian life as such is to speak, not first and foremost of our adhesion to the Gospels, the Creeds or the teachings of the Church ­- indispensable though all this be -­ but rather, first and foremost, it is to speak of an interior gift, a gift from the heart and to the heart. It is by the Spirit that we can have Faith at all, by Him that we can pray, by Him that Christ is made present in the Eucharist so as to feed us, and it is by the Spirit that whatever Christians do and whatever they suffer attain their Christ­-like fertility and spontaneity. The Spirit witnesses to Christ, not by witnessing to an object external to us or beyond us, to someone or something here, or there, that we can grasp. The Spirit witnesses to Christ by conveying Christ to us interiorly, by expounding Him to us and in us as life, so that our very lives are conformed to His. This conformity, the seed of eternity in us, can take place only in the shadow, sometimes experienced as darkness, left by His worldly absence. In that absence, He gives Himself not to be held onto, but to be received and lived, now and forever.