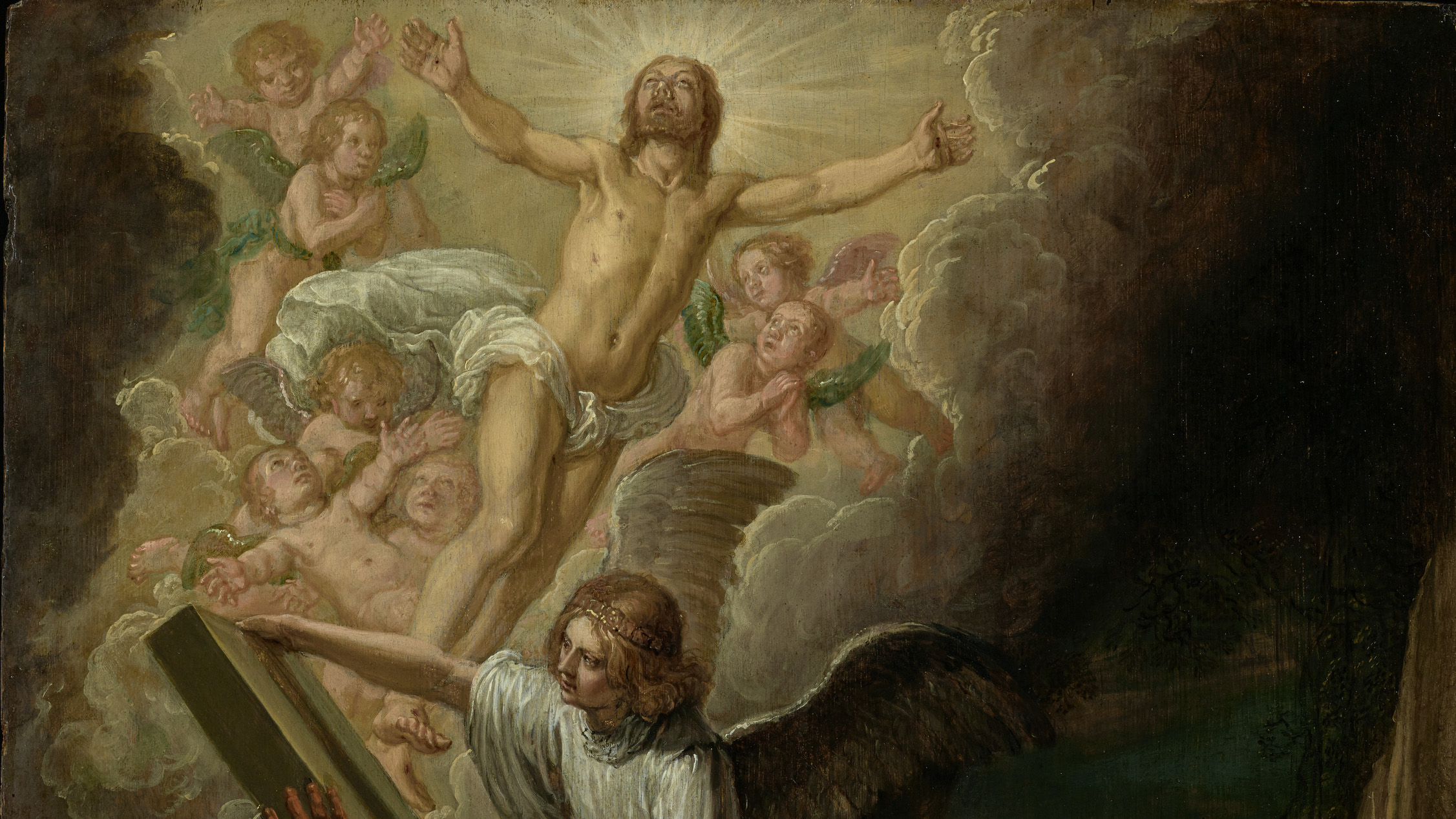 30 Aug Reflections on the Resurrection

Posted at 16:58h in Reflections by St Philip's Seminary, Toronto

He is not here … Come, see the place where He lay. The empty tomb certainly has its own pathos, its own miniature eloquence. It speaks the silence, the absence, which the Resurrection necessarily yields, like the darkness of shadows cast by an unseen light. It shows, we might say, that something happened, but gives us nothing out of which the Resurrection can be imagined or reconstructed. For how can one elicit sound from silence, presence from absence, light from darkness? And yet the tomb’s emptiness doesn’t mean deficiency. The empty tomb does what it can. In its own terms, in the framework of worldly time and worldly space, it tells about the Resurrection everything that can be said. Mundane time and space can know and testify only what the angel summons them to make clear, and concerning the Resurrection their whole truth is encompassed in it: Come, see the place where He lay … He is not here.

An eloquence, then, which is simultaneously a radical inarticulacy: both dimensions of the tomb are comprised in the Church’s Faith. In the Catechism, the tomb is called an essential sign of the real event of the Resurrection: an absence absolutely entailed by Risen presence. And yet, as the Catechism also says, the tomb offers no proof, for the absence of Christ’s body … could be explained otherwise. So we can read back, from the Resurrection to the tomb, but not forwards, from the tomb to the Resurrection. Ultimately, the time and space of the empty tomb witness only indirectly, and only in the context of Faith.

But suppose we continue for a moment imagining that worldly time and space can know and testify to things ­- that is to say, can be witnesses. Shouldn’t we say that they would have witnessed more than we’ve just allowed? And that in fact seems to be the imagination of the Exultet which we sing at the Easter Vigil. O vere beata nox, quae sola meruit scire tempus et horam, in qua Christus ab inferis resurrexit! O truly blessed Night, which alone deserved to know the time and the hour when Christ rose from the dead! This haunting exclamation invites the following kind of thought. Even if it isn’t something mundane time and space can actually tell us, surely there was a mundane time at which the Resurrection occurred and a mundane space through which it moved? And if so, worldly time and space must know more of the Resurrection than the mere fact that He is not here. They must know more than His absence. They must in their own terms know also how that absence came about: the time and space of the tomb, within which Christ first stirred, then rose up, and, finally, departed. Worldly time and space, in other words, encompass not just the absence of the Resurrected Christ, but first and foremost His presence.

Well, perhaps. But in this area the Church seems to want to warn us off. Can we in fact suppose a spatio­temporal framework in which the Resurrection comes about? Can we suppose the initiation of Resurrection to occupy a locatable time and space, which the time and space of the tomb would themselves have known? The Catechism reminds us that no one was an eyewitness to Christ’s Resurrection and no evangelist describes it. Now was this merely something contingent, an accident as it were, so that we can simply supply the details and imagine what would have been seen, if only there had been someone there to see it? No one can say, the Catechism claims, how the Resurrection came about physically. This might be read as implying that there was a way in which the Resurrection ‘came about physically’, and that no one can say anything about it simply because no one happened to be there. But the immediately following sentence in the Catechism is this: Still less was…the innermost essence [of the Resurrection], Christ’s passing over to another life, [something] perceptible to the senses. And this seems to mean not just that no one in fact saw the Resurrection come about, but rather that in principle no one could have seen it. The absence of witnesses is not, then, something contingent. Witnesses were in fact impossible. And it is our Faith in the Resurrection which itself requires us to affirm this.

So if mundane time and space find themselves telling the truth of the Resurrection in a higher mode, a mode beyond absence, then this will be because they have been graced -­ approached and enriched by a plenitude which they themselves could never have generated or demanded. Think about what are often called the Resurrection appearances. Christ doesn’t take time or traverse space in order to arrive at the ‘when’ and ‘where’ of these appearances; nor are they terminated by His taking time or traversing space in order to move away from them. No spatio­temporal continuity embeds or encompasses them. Of course a given ‘when’ and ‘where’ always characterize these appearances, but not by subjecting them. On the contrary, time and space are subjected by the appearances themselves. For as long as the appearances last, the contingency and dispersion of worldly time and space are overcome, subject to an unforeseeable and transfixing enrichment and elevation. So the Risen Christ can be present to mundane time and space, but He is never within them; rather, times and places of His choosing come to be within Him. The Risen Christ can make Himself present to worldly time and space, while at the same time manifesting that He does so freely, from within His sovereign and unfetteredly creative independence of them.

And it is for this reason, I think, that speaking of Resurrection appearances doesn’t seem quite right. The language of ‘appearance’ implies a certain passivity in what appears. The ‘appearance’ of something is its sheer ‘there-­ness’ for us, its compliant accessibility or availability to being seen. And this passive accessibility or availability is in turn an important part of what makes something into an object, giving it what we call objectivity. But the Resurrection, when it manifests itself, is never something passively accessible or available. Neither therefore is it an object, even if we add the qualification that the Risen Christ is endowed with special powers enabling Him sometimes to disguise or seclude His objectivity. Adding such a qualification seems merely to emphasize that we have got things the wrong way round. The fundamental truth is surely His independence of objective being-­in-­the­-world, precisely as a consequence of His radical independence of mundane time and space. If the Risen Christ makes Himself present to the world, it is freely, actively, and out of love. He does not so much appear, in the world, as show Himself, to the world and for the world.

The language of ‘surpassing’ and ‘transcending’, of course, is ambiguous. In some hands it can be deployed to mean negating, forgetting, leaving behind. But in the Resurrection, transcendence is a mode of love. Time and space are not negated or forgotten. That is indeed the deepest reason for insisting that the Resurrection is an historical event: in this culmination of Christ’s redeeming work, the world is not left behind but affirmed; in this culmination, the world is definitively and eternally disclosed as loved. Mundane time and space are not alien to God, trapped in some permanent incompatibility with the Divine. On the contrary, in the Resurrection of Christ God’s eternal time and God’s eternal space embrace worldly time and space as finite participants in His own life. As the Catechism says, henceforth Christ’s humanity belongs only to the Father’s divine realm. In that humanity, all humanity is called and drawn. And not humanity alone. St Paul tells us that in [Christ] all things were created, in heaven and on earth, visible and invisible … all things were created through Him and for Him. He is before all things and in Him all things hold together… For in Him all the fulness of God was pleased to dwell, and through Him to reconcile to Himself all things, whether on earth or in Heaven. The Resurrection, then, is nothing less than God’s final and irrevocable affirmation of creation itself: not only of men and women, but also of our world.