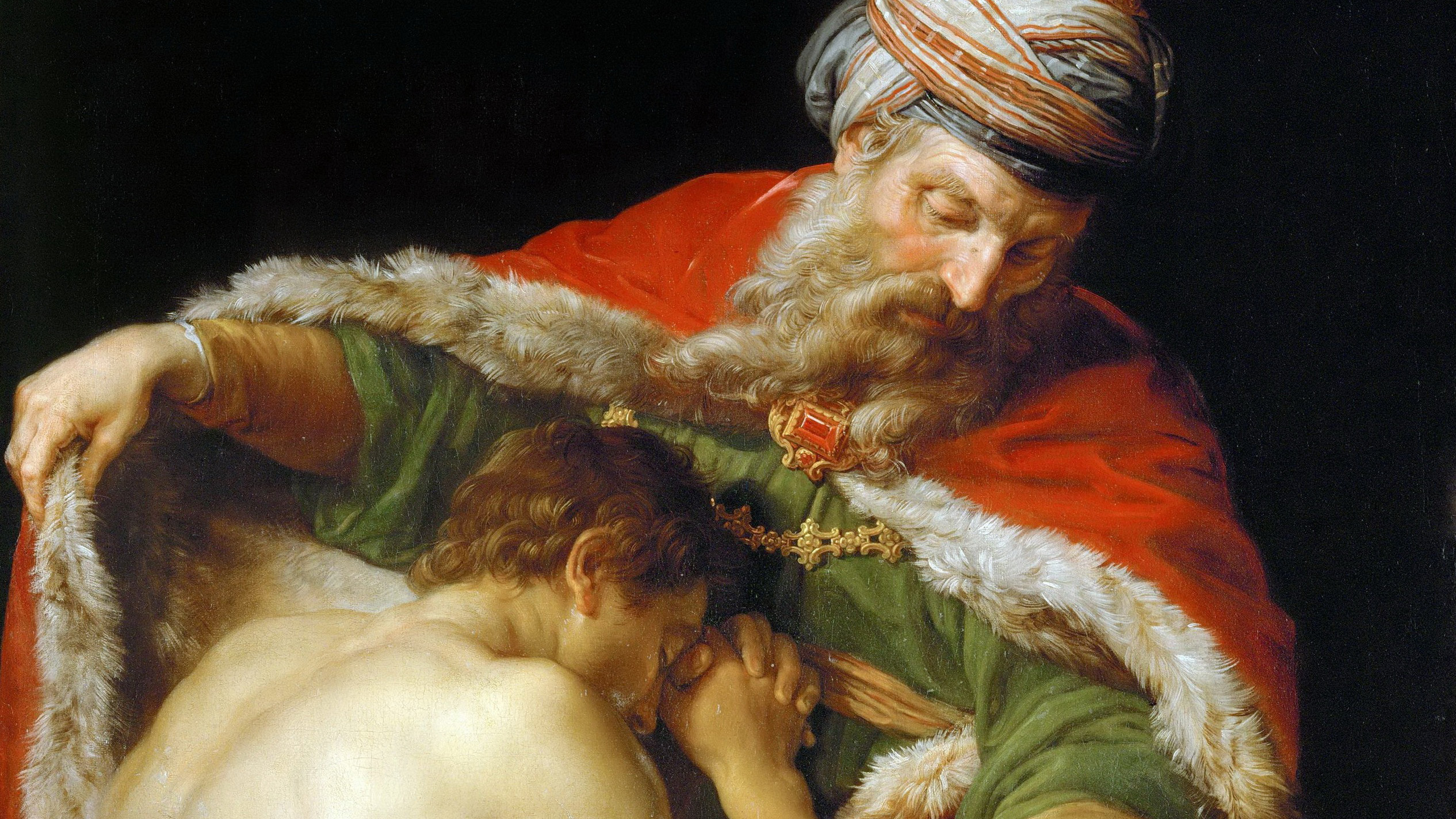 01 Sep Reflections on Dispossession and Desire

Posted at 17:50h in Reflections by St Philip's Seminary, Toronto

Not every one who says to me, ‘Lord, Lord’, shall enter the kingdom of heaven, but he who does the will of my Father. Let us consider this. Who are those who say ‘Lord, Lord’, who speak with this apparently religious urgency, but who somehow miss the point?

What can we hear in their words? Perhaps this: an urgency to possess God, to be in a relation to Him that they can know and experience, putting themselves in His presence, no doubt, but only so that He can be in theirs, somehow reassuringly before them, apprehended as the precious object of their gaze. Lord, Lord ­- it is almost as if they are summoning Him, trying almost to force Him to be real, to be graspable, to give Himself to them in accordance with their desire to see Him and hold on to Him. We think of Mary Magdalene in the garden, reaching out to touch the Risen Christ, to cling to Him, to confirm that He is there for her.

But in the garden, in that moment when she reaches out to hold on, Mary is resisted. As we are resisted, when in this way we say Lord, Lord in order to establish the privileged, palpable clarity we seek. For it is not in this way that we shall enter the kingdom of heaven.

It seems strange, though, this Divine resistance to our desire to know and experience. For this is a very natural desire, and a very natural form in which religious longing can express itself. Why should this religious desire to experience God, to cling to Him as to a sacred presence, encounter His mysterious resistance?

Let’s try to think this through. To say Lord, Lord is in one way to speak, in a religious dialect, the universal language of the heart, the heart that desires to be full, and to know, in possession, the plenitude it projects and desires. For some, speaking other dialects, this plenitude might be imagined primarily as sexual intimacy, or as money, or knowledge, or power. All of these we can desire to know and enjoy, to have as our own, in which we foresee and reach out towards our own completion, the fullness of being ourselves. In the religious dialect God is the object of desire, not sex or power, and it is in God we seek to find ourselves and know ourselves completed. In this religious version, so different in one way from the others ­ since it promises us God rather than the world -­ the underlying movement is nonetheless the same as in more worldly desires. Worldly objects are renounced and a Divine object takes their place; but in both cases we are imagining an object, something to be possessed, and by means of it coming to possess ourselves.

It is in this underlying movement that the problem resides. But in that case the problem seems almost inevitable, inescapable. How else can we be, other than as desiring our own completion? And religion, we believe, gives the answer to the search for what truly completes us. How else can we possibly relate to God, other than as One Whom we desire to possess? And yet we find ourselves being told that if we say Lord, Lord, in that desiring way, we cannot enter the kingdom of heaven.

We are told even more, in fact. We are told that saying Lord, Lord like that turns us into false prophets, dressed as sheep but inwardly being ravenous wolves. Outwardly we seem to be disciples, but inwardly, in our hearts, we are hungry, famished and voracious to consume.

How so? Well -­ we seek God, and despise the world, and yet we seek God only to consume Him, exactly as others seek worldly things: we seek Him in order to possess Him, as the completion of our desire to complete ourselves. It is this that makes us false. We speak and act falsely, not because we are falsifying our desire, but because our desire itself is false: it seems to be about God, but is really about ourselves, or is about God only as a means to our own happiness. But God isn’t a means to anything, so in relating to Him in this way we relate to Him falsely, turning ourselves into false prophets, speaking and acting in His name, but really in our own, for our own sake, for ourselves: outwardly sheep, but wolves in our hearts.

This seems to be very hard on those who seem very enthusiastic about their religion, and who appear to be able to enthuse others. Hard or not, however, the crisis is both clarified and deepened in the following lines: On that day many will say to me, ‘Lord, Lord, did we not prophesy in your name, and cast out demons in your name, and do many mighty works in your name?’ And then I will declare to them, ‘I never knew you; depart from me, your evildoers.’ In these words, the underlying logic of self­-seeking is ruthlessly exposed. We speak of Divine things, we expose and denounce the demonic, we insist constantly and dramatically upon God and His Church ­ and yet all of it is really about us, not about God: we contemplate ourselves, as in a mirror, exhilarated by the spectacle of our discipleship, carried along by a self-­regarding fidelity which is, in fact, infidelity, a contradiction of discipleship, because all the time we are merely nourishing self-­regard. We desire to see ourselves as model Catholics, and thereby seek the perfection of a self-image: in our hearts, in the name of God, we are subordinating Him to our ourselves. And so our impressive championing of the Divine cause does not open us up to Him, but merely closes us in upon ourselves, where alone we can find the satisfaction we seek. We seem to accomplish so much for God ­ but all along we are evildoers.

Now this is very difficult, but nonetheless it is a truth which we have to face: what it means to be a good Catholic isn’t something we can contemplate in ourselves as in a mirror.

Being a good Catholic, in fact, doesn’t involve seeing ourselves at all -­ except in the disposition of penance, in which precisely we do not see an image of ourselves, but see rather the impossibility of such an image, inaccessible in the brokenness, the fragmentation, which is exposed to view in the light of the love of God.

By the love of God I mean, of course, not our love for God, but His for us, and ultimately the Love that He is. It is in this light that all self­-seeking, even and especially religious self-­seeking, is denied us. We cannot seek ourselves in God, because not even God seeks Himself in God. Because He is Love, He offers no home for self-­seeking, not even His own; and if we seek ourselves by trying to ascend to Him, then we will certainly miss Him, because He is in fact travelling in the opposite direction: descending, coming out of Himself towards us, leaving Himself behind for our sake, as we must leave ourselves behind for Him.

God, least of all, contemplates Himself as in a mirror. Beyond Himself, He seeks those whom He loves. And if we are to be His disciples, we must imitate Him, beyond all self-seeking, in the love that reaches out to the other -­ not for our sake, so that the other might bring us to completion, but for the sake of the other himself.

Beyond the hall of mirrors, then, to be a good Catholic is to be drawn into a relay of self-dispossession. God empties Himself for the other, and we must receive this movement from Him, emptying ourselves in turn for the other, whom himself we hope to draw into self­-emptying. Such self­-emptying is another name for Love ­ originating in God, and poured out into the world.

At no point, either in God or in the world, does Love permit a return to the self, the contemplation of self­-completion. The Divine Persons, Father, Son and Spirit, eternally pour themselves out for each other, and have no selves to which to return, except in the form of this eternal self­emptying, selves beyond selves. In this Trinitarian pattern we are called to participate, becoming sharers in Love’s own eternal self­dispossession. To be held fascinated before the mirror, seeking our own completion, is not the kingdom of heaven, but something very like hell.

And so ­ Not everyone who says to me ‘Lord, Lord’, shall enter the kingdom of heaven, but he who does the will of my Father. The will of the Father is Love: the Love in which the Son is begotten eternally in the Spirit, the Love by which this Trinitarian life is poured out upon creation, the Love by which the world not only receives the Trinity but is called to share in it. The Word became flesh to embody this call, to manifest the will of the Father, the Father’s Love, in the form of the Love of the Son: in this form are revealed to us both the Father’s Love for the Son and the Son’s for the Father, an exchange between Them which, in the Spirit, we are called to enter, which the Gospel calls entering the kingdom of heaven. This kingdom is nothing other than the Divine life itself, the Trinitarian life of Love, in which, through the Incarnate Son, we come to share. We cannot enter there by saying Lord, Lord, as to One Whom we desire to possess, as the condition of our own fulfilment. We can enter the kingdom only in imitation of the Incarnate and Crucified Son, who lives and loves in giving Himself away.

Which means, finally, that we must approach the Eucharist as sheep, not as wolves: not ravenously, to feed ourselves, but as disciples, in love, so that expanding outwards from the moment of communion we may draw the strength to leave ourselves behind so as love others. In the Eucharist, we do not so much feed on Love, as Love feeds on us: it is not that we draw Love into ourselves, so as to fill us up, but Love draws us into its own ever-expansive dimensions ­ transforming us for its work, turning us into places in which it can express itself. To those who finally seek themselves, invested in being professionally Catholic and who practise a hyperbolic Faith at the expense of love, the Eucharistic Christ says I never knew you. Lovers alone are those whom Love knows.