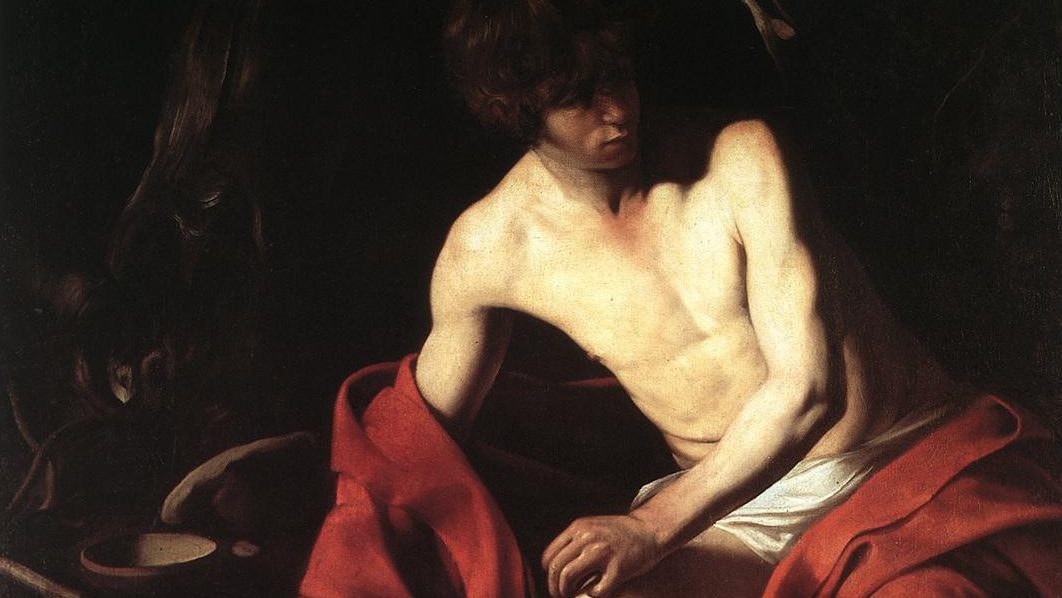 12 Dec Reflections on Flesh and Spirit

Perhaps the most intriguing and suggestive of all the details surrounding St John the Baptist is the one which tells us of what was among his very first experiences: the leap in utero which the presence of Christ drew forth from him. How should we characterize that leap? We should say, I think, that it was a movement of delight, which was not so much something that John performed as something he underwent. Leaping in his mother’s womb was surely an overflowing from what was done to him, a spontaneous responsiveness to being touched by the Word made flesh. It was, we might want to say, a very concentrated and purified kind of arousal.

Now speaking like this, in terms of touch and responsiveness and arousal, draws of course upon the language of sexual intimacy. And sometimes in Scripture, as well as in the testimonies of Christian mystics, such language is very characteristic of attempts to evoke the union that can come about between God and men and women. We shouldn’t view such language as purely metaphorical. It’s not simply that spiritual things are being described in physical terms. The point is rather that in such language the spiritual and the physical are brought together, in a kind of fusion: it is as if the promise held out to us by the Incarnation is that the ancient uneasiness existing between spirit and flesh, soul and body, can in fact be healed and overcome. And this happens, not because the body is subdued or conquered, or even somehow erased. On the contrary, touched by the Incarnation the body becomes more itself, more deeply alive and responsive as a body, sharing in its own unique way in the mystery of redemption.

So it was John’s body that leapt, his flesh, just as it was it was in her flesh that his mother, Elizabeth, experienced what was happening to him – and indeed to herself, for in that moment, St Luke tells us, she was filled with the Holy Spirit. Moreover it is from the flesh of Christ that John’s leap overflows. He does not leap at something purely spiritual, at an idea or thought of the Saviour. John leaps because the Saviour is there, because He is present to him as only embodied persons can be present to one other. And finally, the fact that John leaps surely emphasizes, in its very extravagance, the focussed bodily intimacy of this encounter. When we come at last into the field of presence of the flesh of one whom we have desired to be with, there may of course be drawn from our bodies all kinds of reactions. But spontaneously to leap, for one’s whole body to be taken up in such a concentrated and expressive response – that is surely a very unusually heightened kind of reaction. In such a moment, in such a movement, spirit and flesh seem to inter-penetrate and to become one, as in a kind of dance.

In the Old Testament, we remember that King David stripped off and danced – some thought shamefully – before the Ark of God. So in John the Baptist, as the Old Covenant gives way to the New, John’s leap seems both to echo and to bring to completion the instinct to which David’s dancing gave expression. The Ark before which David danced with all his might, as we are told, was an anticipation of the Divine presence among us which Christ’s human body fulfills. In the Incarnation an actual human body, a man’s body, quite literally lives with God’s own life, the life of the Eternal Son: a life which utterly mysteriously, but equally with the absolute concreteness of the flesh, comes to be shaped and expressed in our own embodied ways of being.

And it is in this astonishing fact, that God Himself – even God – has lived and lives still in a human body, it is in this that our own hope of redemption, for being made whole, consists.

We can imagine perhaps how David’s dance, with all its strange intensity, was a kind of reaching out towards that transforming moment when human bodiliness itself would become capable of expressing the Divine. David’s dance, like much human dancing, strives to summon a kind of inchoate bodily transfiguration.

But suppose bodily transfiguration cannot be summoned? Suppose it can only be received? This is the lesson of the Incarnation. And it is surely that moment of reception which John’s leap expresses and to which it responds. In John the Baptist, David’s energetic grasping for ecstasy is fulfilled beyond grasping, and in the receptive, spontaneous simplicity of the leap in utero, unmediated by the mechanics of fantasy, we see the pure acknowledgment of a gift.

God’s presence in the flesh, which only God Himself can offer and which we can only receive, is here given the most concentrated and purified of bodily responses. And that is because John’s body is led by the Incarnation, exulting in its passivity before the realized promise of God’s embodied presence. In that moment, in pure reception and response, John’s body does not become less bodily because somehow more spiritual, but rather it becomes more bodily, more spontaneous, more expressive, more fulfilled, than David’s dance could ever have achieved.

In many ways we try to make of our bodies – our own and each other’s – all that we desire them to be, in the hope of finding, or rather producing and sustaining, some transcendent meaning and experience. But we discover, sooner or later, that all such projects fail: in unavoidable transience, and in sequels of frustration, emptiness and loss. The bodily fulfilment we desire, the exultation and ecstasy of the flesh, the merging of the physical and the spiritual, isn’t something we can induce or compel. It has to await, and to unfold receptively from within, a grace – the grace promised to the flesh in the enfolding touch of the Incarnation.