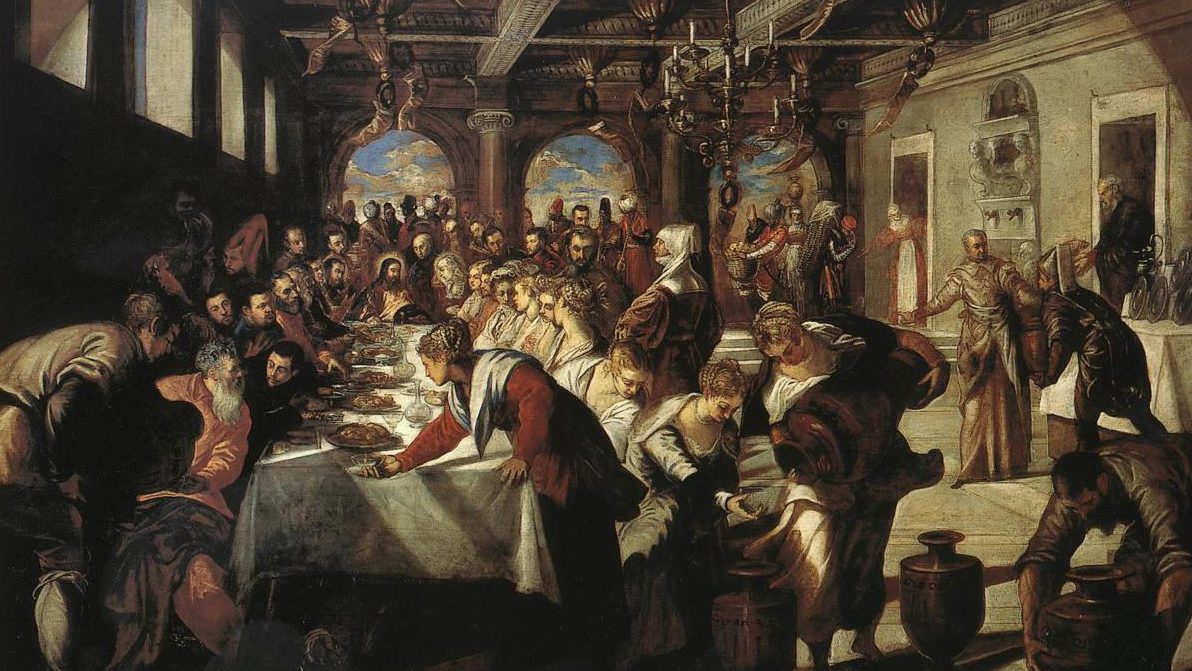 When in the Gospel our Lord tells us to take the lowest place, we shouldn’t assume that being raised to a higher place will sooner or later follow automatically, as a kind of reward. In the parable, the host may say to us ‘Friend, go up higher’; it does not tell us that he will say this. So it could well be that, having taken the lowest place, we end up staying there. Or perhaps we will be moved higher, but shall find ourselves unable any longer to recognize the fact: it might seem to us as if we are merely staying put, or even going lower still. In other words, what ‘higher’ and ‘lower’ mean will be for the host to decide, not we ourselves.

In having taken what seemed to us the lowest place, we are not meant to be waiting to be called higher, but instead we are meant to surrender any concern about being higher or lower, leaving it entirely in the hands of the host. In his hands, rather than our own, is not only the freedom to move us or keep us where we are, but also, and more fundamentally, the very interpretation of where we are. What the host sees and understands may be very different from what appears to us. Dispossessing ourselves of the right to assess our position, and surrendering its assessment to him alone, is the deepest meaning of taking the lowest place.

In all this, what gets overturned is any system of reward of a kind that we can hope to grasp and manipulate. The parable would be pointless if our Lord were simply commending to us a strategy for ending up where we wanted to be in the first place. He isn’t saying to us ‘of course you desire the higher place, but act as if you don’t, and as compensation I’ll make sure you attain it’. We are not being offered a contract, in which our willingness to be placed lower is the price of a subsequent elevation that we already foresee and comprehend.

And this is true even if, as I think we are intended to, we interpret the highest place as Heaven itself. Heaven isn’t the supreme point of a visible and intelligible hierarchy, it isn’t a merely delayed consummation that we can foresee and anticipate as compensation for everything we have done in order to achieve it. If we still speak of the reward of Heaven, we must remain mindful of a difference between this reward and every other kind, a difference that transforms everything and makes the original language of reward seem very inadequate.

For a reward is always a goal we understand in advance, that fits into our already existing system of values, and for the sake of which we operate, within the system, in order to achieve the promise which the system holds out to us. Earning a reward may require of us skill and determination, but it doesn’t require of us transformation. On the contrary, it depends upon an unchallenged familiarity: it depends upon knowing the system, knowing exactly where in the system we are, and how within the system to get to where we want to be. But Heaven, by contrast, is not within any system, and no skill or determination in operating a system will lead to it. The life of Faith, Hope and Charity can’t be reduced to a set of practises and transactions that we can master, or at least perform adequately, in order to attain Heaven as a result. On the contrary, Faith, Hope and Charity master us, bringing about a transformation of which Heaven is indeed the effect, but towards which we cannot plan or calculate or strategically position ourselves at all.

The Pharisees, in today’s Gospel, believe otherwise. They are custodians and experts in a religious system that can be taught and practised, and like every such system it is immune to transformation from outside.

That is why, when Christ dines with the Pharisees, we are told that they were watching Him. They were indeed watching, but they were not seeing. They were scrutinizing Him for signs of His conformity to the system, and He understands this scrutiny and articulates it for them: And Jesus spoke to the lawyers and Pharisees, saying, ‘Is it lawful to heal on the sabbath or not?’ There is no answer to this question – we are told that in response the Pharisees were silent – and the reason there is no answer is because the system can’t envisage or provide for what Jesus brings. That is why, for all their watchfulness, the Pharisees do not see – do not begin to apprehend – what, or rather Who, is before them.

The sabbath prohibited work, and surely healing is a kind of work, which means that the rules governing the sabbath ought to prohibit it. But this kind of work has an unprecedented beauty and charisma that cannot be denied, even though the system cannot receive it. Then He took him and healed him, and let him go. This work – the healing – breaks the system open and discloses what is really at stake. Is the healing lawful? What law could possibly require it – or, indeed, forbid it?

The Pharisees are therefore subject to a moment of disorientation, a dissolution of familiar patterns and goals; they are thrown into a state of unknowing, in which what had formerly guided them must fall silent and the only available light is the mercy that Jesus discloses and enacts. The Pharisees do not know how to respond, how to live with what they are being shown, for mercy cannot be lived within the system that constrains them.

Now this constraint is of a particular kind: it limits them, of course, but it also accords them unique power and authority. And it is this power and authority which is instantaneously challenged by the work of healing: if this is possible, then their own status is rendered impossible. The breaking open of the system which they serve is simultaneously their own breaking open, their being rendered helpless in the face of a beauty and charisma which exceeds them. And here the secret of the system is disclosed. The system is valued because it affords control – knowledge, expertise, authority – to those who operate it: it is a phenomenon geared to human self-validation. And this is ultimately the reward for belonging to it.

That is why our Lord’s next question to the Pharisees is so telling: Which of you, having an ass or an ox that had fallen into a well, will not immediately pull him out on a sabbath day? In pointing to this minor, but nonetheless revealing, infraction of sabbath rest, an infraction which the system provides for and tolerates, its self-serving and self-centred truth is made manifest. It is not tenderness for the ox and the ass struggling in the ditch, but a cold spirit of self-protection and self-perpetuation, which motivates and sustains the infraction; as for the man with dropsy, he and his kind are rendered invisible, behind the veil of self-assurance which the system generates and propagates. What falls into lowest place, the suffering animals and humanity itself in its suffering – all this gets eclipsed: everything looks towards and serves the reward of the higher places, where the power and authority of the system are consolidated and deployed. And immediately following this insight, as if to complete His unmasking of the system, Christ tells His parable of higher and lower. Take, or be willing to be given, the lowest place, the place which seems most distant from the rewards of the system, and there learn to surrender everything to God.

Rewards, we have discovered, are strictly proportioned to the power to receive them. That is why suffering animals and human beings fall from view. They lack the capacity that rewards demand. In any system of rewards, the power to do what is necessary to attain the rewards, and the power necessary to hold onto them once they have been attained, is essential; any system of rewards is, indistinguishably, a system of power, deployable by those who will be, or already are, rewarded. In such a system, nothing is simply given, as Christ gives healing to the man with dropsy: giving becomes impossible, and therefore mercy as well, and behind both impossibilities lies the impossibility of love itself. Rewards belong exclusively to the economy of the loveless.

And yet, as St Paul teaches in today’s Epistle, the whole meaning of the Christian life is to be rooted and grounded in love. To be rooted and grounded in love, therefore, requires that we stop anticipating rewards, stop plotting to receive them, and render ourselves completely transparent, beyond all calculation, to the will of the Father: which means, as St Paul explains, letting Christ, and Him alone, dwell in our hearts.

It means this because Christ Himself is the origin and pattern of Love. For He sought no reward, or indeed anything for Himself, but all that He had He willed to receive, gratuitously, from the Father on behalf of the world. This is manifested above all in what we might call His states of unknowing: in the total dispossession of all system, all co-ordinates, of all experienced assurance and belonging, which He endured in Gethsemane, on the Cross, and in His descent among the dead.

What, in all this, was His reward? Was the Resurrection His reward? But Christ’s Resurrection cannot be understood as compensation for the trials He endured. It was, even for the Incarnate Word, an unforeseeable gift from the Father, breaking in upon His willing occupation of the lowest place of all, where He was allowed no anticipation whatsoever of being taken higher.

For in Christianity it is finally God Himself Who takes the lowest place, when the Eternal Son enters into solidarity with us in our suffering alienation from the Father. My God, my God, why have You forsaken me? And this, for Him, allowed no vision of escape except the gift, or grace, of being rescued, on our behalf, by the One to Whom, for our sakes, He did not cease to entrust Himself.

This surrender of all self-interest to the demands of Love, and Love’s vindication of that surrender in the Resurrection, is what St Paul invites us to comprehend with all the saints as the breath and length, the height and depth. This is the infinity of God’s love, manifested towards us in Christ and in which we are called to participate. If we must speak of rewards, then the only reward in Christianity is the reward proper to loving. But love is its own reward; the lover’s only compensation is that, indeed, he loves.