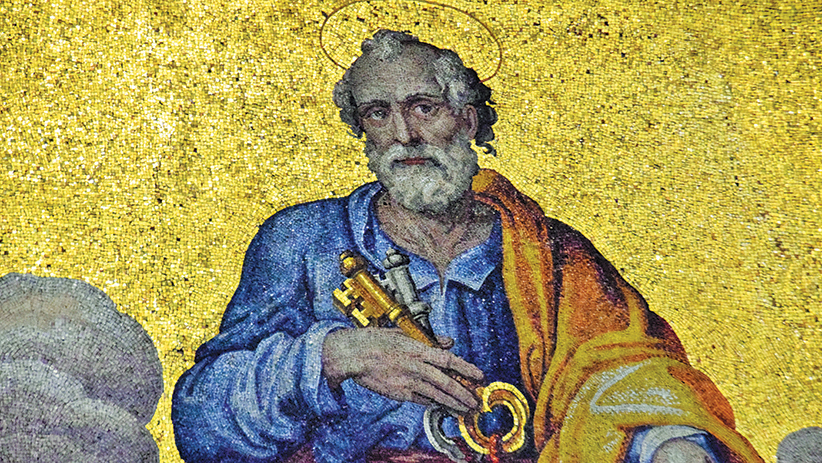 20 Feb Reflections on the Petrine Mission

“Blessed are you, Simon Bar-Jona! For flesh and blood has not revealed this to you, but my Father who is in Heaven. And I tell you, you are Peter, and on this rock I will build my church, and the powers of death shall not prevail against it”.

In these words, Peter’s vocation could hardly be accorded a more dramatic and encompassing validation. And yet if we read on for only a moment longer, taking in the lines that immediately follow this validation, we find an astonishing inversion of it, what seems to be an almost symmetrical reversal of its meaning.

To arrive there, however, a prior inversion has first to be accomplished.

This takes place when Christ unveils to the disciples His vocation to suffer and to die. In doing this, He is recalling Peter’s confession of faith – You are the Christ, the Son of the living God – the apparent meaning of which He is overturning so that its true implication can be unveiled. Peter’s confession seemed to embody a promise of power and glory both for Jesus Himself and for those who follow Him. But at once Christ turns this on its head: what it means to be the Son of the living God involves not power and glory – at least not as we instinctively understand them – but their negation: an endurance of weakness and marginalization even to the limit of extinction. If power and glory are still in play here, it is only by way of a complete dispossession of all that we mean by them, according to a transforming destitution in which, uniquely, Trinitarian power and glory can be definitively revealed.

This is the first and decisive reversal which the Gospel accomplishes: from our imagination of who God is, to the God Who reveals Himself on the Cross. Everything else in Christianity, and in the lives of Christians, follows ineluctably from this – according to an impetus, a logic and a fulfillment which asks of us, as T S Eliot put it, not less than everything – abandoning even life itself into the Father’s hands.

But to contest this nearly intolerable demand, Peter intervenes: And Peter took Him and began to rebuke Him, saying, “God forbid, Lord! This shall never happen to you”. And from Peter’s words there follows the second reversal, contained in the first but now explicitly drawn out. It is in this second reversal that the imposing statement of Peter’s vocation – which Christ has only just spoken, with a resonance that has hardly begun to fade – is apparently immediately undone. Christ turns to Peter and says “Get behind me, Satan! You are a hindrance to me; for you are not on the side of God, but of men”.

As we noted a moment ago, the inversion is almost symmetrical. From being the one with whom Christ will intimately cooperate in order to accomplish His work, Peter is now repudiated as a hindrance, cast into the darkness from which Christ must definitively turn away. From being one whose faith founds the church and resists the powers of death, Peter is now identified with those powers, indeed with Satan, whose powers these are. And from being one whom not flesh and blood, but the Heavenly Father Himself, has enlightened, Peter is now disclosed as one in whom flesh and blood speaks so as to obscure and obstruct all that God intends to make manifest.

The contrast is so stark that we feel an almost irresistible urge to resolve it, finding some way in which we can allow only the first, affirmative note to sound, while the second is either overcome or simply  banished to the margins of consciousness. And yet we must resist doing this, because if both notes are allowed to sound, and their resolution, whatever it may be, is left to God, then – and only then – a distinctively Christian harmony becomes audible.

For just as, in the first, Christological, reversal, both moments are necessary – the destitution of human power and glory, so that Divine power and glory can be manifested in the suffering and dying flesh of the Incarnate Son – so also, in the second, Petrine reversal, both moments are intimately interdependent: the affirmation of Peter’s human’s weakness, his capacity for incomprehension and even betrayal, precisely so that the Divine strength unconditionally promised him can be lived out in the world and manifested there. Just as Divine power is not hidden but revealed in the human weakness of Jesus, and Divine glory not veiled but unclothed in the ignominy of the Cross, so God’s promises to Peter, and the work which God will accomplish through Him, are not contradicted by Peter’s fallibility, but are shown forth there, contained and released as the Divine meaning secreted within the often unmistakeable poverty of Peter’s human responses.

In other words, when Christ says to Peter “Get behind me, Satan!”, He doesn’t withdraw the promise He has just uttered – “You are Peter and on this rock I will build my church” – but, on the contrary, sustains that promise, while at the same time making clear that it has nothing essentially to do with  any kind of human strength or magnificence in Peter and his successors, but is founded entirely in Divine fidelity, which will uphold the Papacy in spite of itself. In this paradox lies the insight necessary for an authentically Christian theology of Peter and of the Papacy.

For what are we being shown here, concerning the meaning of Christ’s election of Peter and of the promises lived out in Peter and his successors? In thinking about this, we shouldn’t expect, or try to impose, a simple transposition of Divine fidelity into human terms. Starting with Peter, the Papacy isn’t among us as a transparent representation, or icon, of Divine presence and Divine grace. If Peter himself, and the Papacy founded from him, is to be called iconic, the iconography in question points to a quite different reality. It shows us the entry of the grace of Christ into the waywardness of human flesh, an entry in which that waywardness is born by Christ not, here and now, to erase it, but to sustain, from within it, and over time, the transforming but often hidden work of grace.

Following out this line of thought, we can apply to the Papacy the insights articulated by St Paul who, in the liturgy, the devotion and the imagination of the Church, is the apostolic figure always most intimately complementary to the Petrine office.

With St Paul we can say, then, that the treasure of the promises of Christ embodied in Peter and His successors is a treasure carried in earthen vessels – to show, as St Paul says, that the transcendent power belongs to God and not to us. The Petrine office doesn’t imply any exemption from this Pauline insight, but is in fact – and precisely because of the primacy that Peter enjoys – its deepest and most exemplary instance. For the Petrine primacy isn’t in any sense a worldly primacy, but a primacy in the order of grace, which is the grace of the Cross – and therefore everything which applies to that order applies in an intensive way to the Papacy.

To Peter and his successors, then, God says that “My grace is sufficient for you, for my power is made perfect in weakness” – and He says it, to them, with a special insistence, derived from their unique vocation to preside over the community of grace which is the Church. Here, in the Divine constitution of the Church, we shouldn’t expect human power and human magnificence, and ought to feel uncomfortable when it seems to gain too great a predominance. What we should hope to see is  precisely, and exclusively, the triumph of grace in the flesh revealed to us on the Cross. This, surely, is what marks the Church as the Body of Christ. And this triumph St Paul pointed to by that saying that, according to God’s great mercy,  where sin increased, grace abounded all the more.

And in fact isn’t it clear that the Papacy has always experienced, in innumerable ways, those thorns in the flesh which, according to St Paul, are given by God in order to mortify the self-righteous elation of spirit by which the work of grace is obstructed? Because of this, Paul can exclaim that [for] the sake of Christ…I am content with weaknesses, insults, hardships, persecutions and calamities; for when I am weak, then I am strong. And in saying this, he doesn’t necessarily mean that it is out of an absolute fidelity that  everything is for the sake of Christ. For our infidelities, too, can be said to be for the sake of Christ, in as much as God permits them so that, through our repentance, His grace can be manifested in overcoming them. And it seems obvious that historically, and even today, the Papacy offers us many examples of this – not just externally imposed, but also interior vulnerability.

Properly understood, this shouldn’t discourage us. On the contrary – the weakness of Peter is precisely the site of Divine strength, so that, mysteriously, the grace of God’s promises to the Church can abound in her.