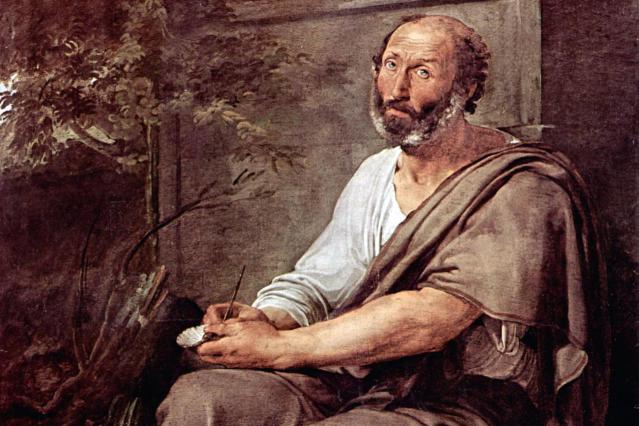 22 Feb Being and not nothingness

There is a Frenchman named Jean-Luc Marion, student of Derrida, who wrote a book entitled God without Being. It is one of those horse texts (er, “hors-texte,” or outside-the-text) we rightly associate with post-modernism, and gentle reader may be aghast if I don’t run it down. Marion himself is celebrated in all the wrong ways, in all the wrong circles, from my seethingly provincial point of view. He has, to my uncertain knowledge, never been quoted with approval by a single member of the Tea Party. On the contrary, he was elected an immortel to the Académie française (taking the seat of the late Cardinal Lustiger), and that should be that: … Dismissed!

Some fifteen years has passed since I first acquired a copy of this book and attempted to read it. I found it exhilarating. In my nutshell, it argues that if God is Love, then in some sense “Love” is prior to “Being.” The theological implications of this mischievous notion are then teased out. What begins as apparently a wildly irresponsible, deconstructionist attack on the received Christian theological tradition, turns persistently on dimes, until we find it merely attacking Heidegger. Or, put another way, by the time Marion is finished with the modern conception of “Being,” there is nothing left standing except God. As I say, exhilarating. Had I been working in that publishing house, it might have appeared with the title, “The Incredible Caducity of Being.”

We then discover that (the more ferocious Catholic traddies should avert their attention for a moment) — Marion is also a disciple of Danielou, Bouyer, de Lubac, von Balthasar, under each of whom he seems also to have studied. And that, in God without Being and subsequent books, he seems to be trying to square his doctrines with those of Saint Thomas Aquinas, and other scholastics. His presentation of Christ as “pure gift” is moreover a hinge between what we imagine to be plain traditional teaching, and what might otherwise appear to be “no longer in Kansas.” His dangerously Neoplatonic notion of the “saturated phenomenon” — let us say for shorthand, truth so dense that it overloads truth — wends us back to Saint Augustine. Marion is an unfamiliar train taking us through some very familiar stations.

Would I put him on the Index? … But of course, I would put everyone on the Index for at least fifty years. To rotate Marion, I think that love should precede being, for authors spouting novelties. We may be able to see, in another half-century or so, whether Marion was a flash in the pan, or if another generation entirely can find some use for him. My own suspicion is that there is something in the love-before-being thesis, of real value to Christian faith.

Let me put it this way. In juxtaposing e.g. Thomas Aquinas with Martin Heidegger and the boys, on the question of Being, I find they are not speaking quite the same language. On the other hand, when moving from Saint Thomas to, say, the Vedanta, or to the Bible itself, I find that they are speaking the same language. “Being,” including that which presents as I-Am-That-I-Am, is a kind of action. By contrast, in the modern philosophers — and by this I mean almost everything since Descartes — “Being” is a kind of lump, or physical solid, described abstractly. It doesn’t really do anything, it is just there. Whereas, to oversimplify Marion, it is not there at all, it is instead doing something.

But Christ is there, to be sure, as what have you — let us say, “pure gift.” And His there-ness, we are to understand, was from the beginning, before all worlds. “In principio” means not only in the beginning but also “in principle,” or “prior” in the philosophical sense. We might also supply “at” or “on” as alternative prepositions of place. I am not writing this to restrict the meaning of the opening of Saint John’s gospel, but rather by way of opening the star-gate. Our temporal notion of before and after may be viewed as a trap. To say of God, that He “was there, in the beginning,” i.e. the beginning of time, might lead us into a very confined, or constrictively modern, and finally atheist, apprehension of the Creation itself.

Or if you will, it will lead us back into the fatal Cartesian bifurcation, by way of various post-Cartesian imbecilities, in which God winds up this clock, then leaves it ticking till the end of time, perhaps dropping in Christ as a kind of daylight-savings-time mechanical correction. The machinery of Nature is allowed to be miraculous, on this view, but only just barely. For sure, it is something, or if you will, “not-nothing.” Being, against the atheistical background of non-being, comes as a surprise. Something appears to come out of nothing. (To which the atheist adds, “ho-hum.”) …

Observe, that it is “pure gift.”

The Creation is not like that clock, and cannot be like that. The temporal “in the beginning” continues as we speak. God has created, is creating, and will create and sustain in every moment, in perfect transcendence. I would add, too, in perfect immanence, except that notion is too easily misunderstood — thanks, I would say, to our received modern notion of Being as an abstractly-described physical solid; or if you will, that blockhead notion that comes from drinking too much empiricism and not vomiting enough.

For conversely, the very somethingness of God eliminates the possibility of nothingness. That somethingness may be beyond comprehension, but cannot be denied. I think of a mukhya Upanishad — composed long before Jesus, before even Buddha — in which I once read: “He is not a male. He is not a female. He is not a neuter. He neither is, nor is not. When he is sought he will take the form in which he is sought; but again he will not come in such a form. It is indeed difficult to describe the Name of the Lord.”

And the Messiah came in a form we were not expecting.

In the crèche, in the holiness of the Nativity, we contemplate an astounding metaphysical fact. Our Lord has come to visit us “in person.” All the prophets have arrived in Bethlehem, in the humblest of rock-solid caves, with the animals, the sheep and shepherds of the fields, and too, the angels of the Creation. Not “elsewhere” but in the order of our own Being. Unbelievers may make of this what they will — some sweet little fairytale I suppose — but for me it cracks open that whole order of our Being. For everything that could be said about this world, it was not as it appeared.

The Love, the “pure gift”; the mystery of fatherhood in the person of Joseph, and of Mary the Mother of God; the fulfilment of all prophecy “from the beginning” — it is all there, in the crèche. The “ideas” that will be presented in due course, in the Life, the Teaching, the Crucifixion, and Resurrection, will be of necessity perfectly astounding, as they follow from this. But really I find even more astounding the bottomless simplicity of this question:

What child is this?