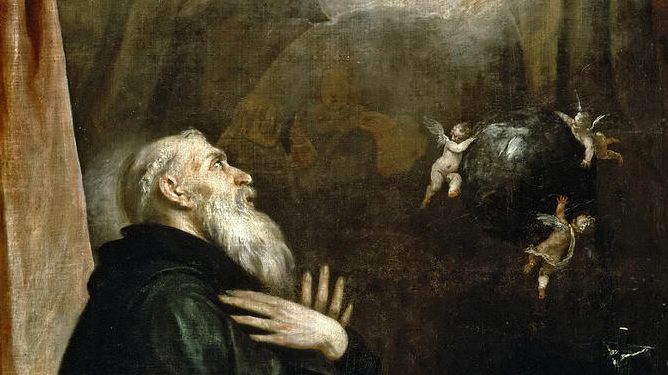 Let us revise the “Benedict option,” named by Rod Dreher, and proposed by him and many others. They invite us, in effect, to head for the hills, or to the nearest virtual equivalents; to separate ourselves, in mind if not in body, from the depraved society in which we find ourselves immured. Christians should detach, so far as we are able, and go our own way. To some extent, we must always do this, or have always done, insofar as being sincerely and faithfully Christian puts one beyond the worship of worldly power. We have always been in one sense traitors to Caesar, and to his successors; in another, perhaps Caesar’s only real friends.

I, for instance, have already retreated to my ivory tower, or mountain hut, or small apartment, high about Parkdale. Unfortunately I can still hear things from the street; and must leave my sanctuary to do imperative things, such as go to the corner and buy cigarettes. And while I may have ninety square feet of balconata, plentiful sun, and a water tap still working, together with computer access to hydroponic, and even aeroponic methods, I frankly cannot feed myself by gardening. Others I know have found parallel constraints, in their attempts to disengage from the filth around them.

Sometimes I walk farther than the corner, and often to a small, blessed seminary where I teach “CatLit” (Roman not feline) to some impressive young men. They wear costumes that mark them apart from other denizens of Parkdale; and while none is yet a priest, nor fully launched on the life of monk or canon, all would appear to point in that direction. Often they astound me because they seem to have mastered, in scarcely a score of years, things on which I’m still working after three. They have, in the old hippie terminology, turned on and tuned in (to the Holy Trinity), and dropped out (of conventional society), in a way my contemporaries could not imagine when I was young.

This is partly, let me aver, because there are “options” available to them that weren’t there for young Catholics when I was (not Catholic but) young. Several had the luck to come from “underground” — from backward-looking, “traditional” Catholic families. A high proportion were home-schooled, in America or far abroad. But all through happy circumstance came in touch with a religious order that is rekindling our ancient Faith. Forty, and even fifty years ago, in my cultural orbit, monasticism was too busy collapsing to offer a plausible vocation to almost any young man. Today it is reviving, though not everywhere. But there are beacons in the desert of modern life, that have been lit by a small minority of Latinate “Traddies,” who are also filling churches that had emptied “in the spirit of Vatican II.”

It often happens — I am tempted to walk so far as, “it always happens” — that a small, almost invisible minority begin to grasp Truth by seeking it. The great majority are otherwise engaged. Catholic civilization was hardly built and rebuilt by some silent majority. The conversion of the rank and file of men and women, after their first movement away from the profane and towards the sacred, depends on the work of Peters and Pauls, often doing things that make no outward sense to bystanders.

A “Benedictine” option is my preferred revision, to acknowledge this mysterious call. The “still small voice” is beyond most hearing. Yet somehow it can still be heard even in a society like ours, heaped with noise and unspeakable vulgarity. The Holy Spirit has not ceased His whisper; and the ear of human conscience may not be quite deaf.

I blame the Church for many things — from allowing the Reformation to happen, to losing the Culture Wars today — by foolish retreat from her own divinely-appointed authority. She has, through five centuries of frequent failure (and not five decades as we glibly assume) let the “modern,” post-Christian world metastasize. Her task is now impossible, “with or without divine assistance,” most people believe.

Yet they are wrong. Anything once achieved is by definition achievable. Even within the modern world, impossible things (such as the Counter-Reformation) can be somehow pulled off. As the (Gospel) saying goes, “With God all things are possible.” But this is not so with man; and that is why politics have never ended well. We are radically mistaken to imagine that man can accomplish anything by himself, from his birth, forward.

The “Benedict option,” so far as I have seen it expounded, strikes me as one of the mistakes. It is a proposal for what we, as men, can do to make things better. The word “option” already gives the game away. We have created a society that is spiritually uninhabitable, with all our other options. This one will fail, too; fail even to get started.

In my youth, a few hippies went back to the land, and a few of those did stay there (becoming wild reactionaries sometimes, as they toughed it out). I applaud “back to the land,” myself, as a half measure. But it isn’t the solution to any real problem. Real options are presented only by God.

It happens in class we have read, in passing, the scientifictional “classic,” A Canticle for Leibowitz (1960). I won’t go here into its virtues and flaws, how well it was composed, or whether it belongs in its assigned genre. The “idea” of it is spectacularly good: to cast light upon the nature of human history by projecting a parody of it, leaping forward about six centuries at a time. It was cleverly done, to attract the mass audiences it has enjoyed since it was first published; though its doctrinal core is lost on most. The author himself might perhaps be counted among his misreaders, for he ended by blowing his own brains out, after being unable to finish another book.

He seems to have written the one he did finish in memory of the military obliteration of Monte Cassino (founded by the original Benedict of Nursia), in which he had participated as an American soldier during the Second World War. He married a Catholic, and for a time his trauma was turned to good effect; then the trauma returned. I find in it the poignant story of a fragile man, trying to chart the intractable, with inadequate tools. There is, however, much to be learnt by considering his brave but hopeless attempt: to understand history in relation to a feeble yet weirdly indestructible Church.

The abbey at the centre of the novel (really three novellas, varied on a theme) is presented as a small unflagging island of civilization, in a desert both of space and of historical time. It is out in nowhere, as the Church it represents; yet somehow the world has revolved around it. Inside, the monks have done what monks have always done — kept alive things only they would or could, in retirement from the world. They have preserved tiny archaeological fragments, which they imperfectly understand, from our own era — which had then passed not only through the “Flame Deluge” of a nuclear war, but a subsequent murderous “Simplification,” darker than any Dark Age. And all their efforts are turned against them in the end, for the world has meanwhile grown no wiser, and makes the same mistakes again and again.

A monk in anno Domini 529 is not, in principle, different from a monk in 1960, or a monk in 3781: the same tasks, the same Mass, the same way of living, without “evolution.” And all this time the world goes round in circles. Walter M. Miller, Jr., presented this as fact — beneath the superficial facts of change. To the end, 1,765 years from now, the same old Church is still “blindly” resisting such peccadilloes as euthanasia and abortion; is still confessing the same unrevised Creed. Out there in the world, the “good guys” are still losing; and men still do not know what causes they serve, from out of the same old vanity that blinds them.

The Benedictine “option,” or rather calling, is to the few, not to the many. It is, and has often been, unimaginable to those who descend from parents, and leave children in their turn; or otherwise follow the louder calls of our human nature. Even to hermits, the obedience is hard to fathom: the aspiration to die unto self. Yet by the grace of God it will be heard in some quarters; and over time it is efficacious — not by human, but by divine will.

Quietly, it may be, God is resupplying the monks and nuns we so desperately need: to pray for us, constantly, and actually to preserve us, against an Enemy we can’t even see.