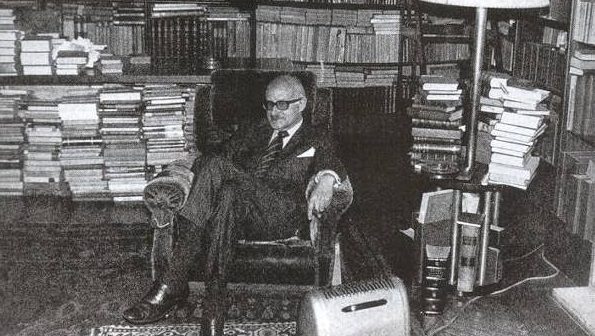 The final nightmare of modernism, foreseen by Nicolás Gómez Dávila, seems outwardly to be upon us, but the fact it was so clearly foreseen speaks against its finality. Dávila, the great Colombian reactionary, so perfectly foresaw “the trend in world events,” that with all his gifts of penetrating reason he embraced a knowing reclusiveness, and buried himself in a private library (some ten times the size of that in the High Doganate). My Joint Chief Washington Correspondent having found a translation of what seems to be his longest epigram, I pass it along as a public favour. (Here.) Years, years, before names I will not bother to name, he captured that vain dementia which constitutes the post-modern mind, proving in retrospect its lack of development. Matthew Schmitz and William Randolph were, until last year, reposting Dávila’s aphorisms in English on Twitter, as a kind of tease. (Still archived here. I linked to a previous effort, here.) My purpose today is limited to reminding that almost everything I say, about the strange filthy world presented in our universally “fake news,” has been anticipated, and is better and more concisely expressed in Colombian Spanish.

Take, for instance, only this aphorism, apt to the present situation in Rome:

“Concerning himself intensely with his neighbour’s condition allows the Christian to dissimulate to himself his doubts about the divinity of Christ and the existence of God. Charity can be the most subtle form of apostasy.”

All one can add, is that it has ceased to be subtle.

I differ from “Don Colacho” (as he signed himself), only in this respect: I think that we should be slightly more interactive, through any media available to us; show the naked for what it is, with a little more aggression and insolence; and where necessary, accept the consequences. Never miss a chance to proselytize. Nonetheless, in defiance of the principles of mass advertising — on this eve of the Conversion of Saint Paul — I know that people can be reached only one at a time. And that imbeciles are by nature unreachable. That sandals need dusting sometimes. Strive to inform the last surviving reader (and “the soul you save may be your own”).

What is true was always true, and what is now false was always so. Though everything seems to change, nothing really changes, and the essence of the reacción we espouse is to acknowledge what is actually immortal. Hence the preference of poetry to politics; for personal liberty over the activism of slaves; and the teaching of the God-man Christ over the trite and malicious slanders of the fashion coolies opposed to Him. The rewards for this can only be in Heaven.

Don Colacho does not stand alone, although he is unique in his genre. Without exception, all the great human minds were reactionary, or rose to that state in moments of inspiration, in none of which they ever pleased the crowd. Or that is my earnest belief, after sixty years of reading. Earthly power, rightly apprehended, is a tinsel that will soon blow away, and let us take contentment in its passing, for everything that it pretends to offer will also pass, and the powerful today are the dust of tomorrow.