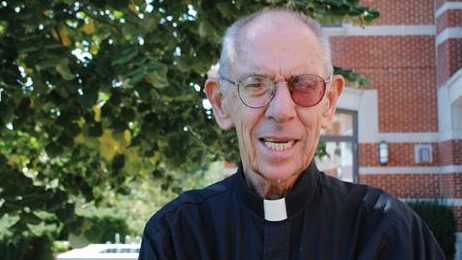 “To be at peace with the absurdities of the world, which he knows to be part of a divine plan he doesn’t presume to grasp fully.” (Weigel on Schall, echoing Saint Peter, quoted by Deavel in Catholic World Report.) By a happy chance I discovered that as of this past January 28, 2017, Father James V. Schall entered his ninetieth year. I thought he was a bit older than that, actually; after all, he formally retired as a university perfesser nearly five years ago. I hadn’t expected him to do that till one hundred; but perhaps at Georgetown University they have an early retirement policy. And I have been reading him for what seems like a century, though it turns out only forty years or so. He writes, I think, more than I do; still does from what I can see. But what I seem to do as a way of life, he does in his spare moments. Dozens of beuks and still counting, thousands of essays year upon year, each impressively learned, and not one sentence pretentious. Moreover, he never loses his temper, in territory where one’s temper is usually the first thing to go.

If you asked me where I got my politics from, I would always say Homer, but in justice I should add that the rough edges were largely sanded down by this young Jesuit writer and thinker, whom I first discovered in the pages of obscure journals. He is still sanding, for I was very rough. Both directly and through later contemplation I would say he taught me that politics are incomprehensible unless well-founded in a worldly understanding and a reasoned faith. He has been like a good boxing instructor, who shows when to deak and when to pounce; when to pull punches and when to let fly. He speaks for a Christianity that can be gentle and muscular at the same time; balanced and inwardly still while constantly in motion.

I was a freshly-minted Christian when he came into my ken, in the later ’seventies; though already from my slight experience of life a fairly robust soi-disant “conservative,” stirred by the loss of Vietnam, and by friends who had come in exile from the wrong side of the Iron Curtain. What I needed was some tactical sense, and by this I mean some divine guidance, through a world very much under Caesar’s control, which it was not my calling simply to ignore.

So in wishing Father Schall a happy birthday, across the thousands of miles to Los Gatos, California, and the years that have passed, I find that I am writing only of myself. This is the mark of a great author — that he is absorbed into one’s own flesh — but also evidence that I have never met him. I must know a dozen people who know him; but have been too shy to bother him, and aware he must be very busy. I was astounded to find he sometimes reads these idle Idleposts (a proof that he has read everything), and was proud like some former pupil to find him quoting me, one place or another. And it is with the thought that this little squib might reach him that I want to say, to Father Schall himself: God bless you for all you have done, and God give you many more years, if only for the benefit of my own slow wit.

Also read: An interview with Father Schall at The Catholic World Report