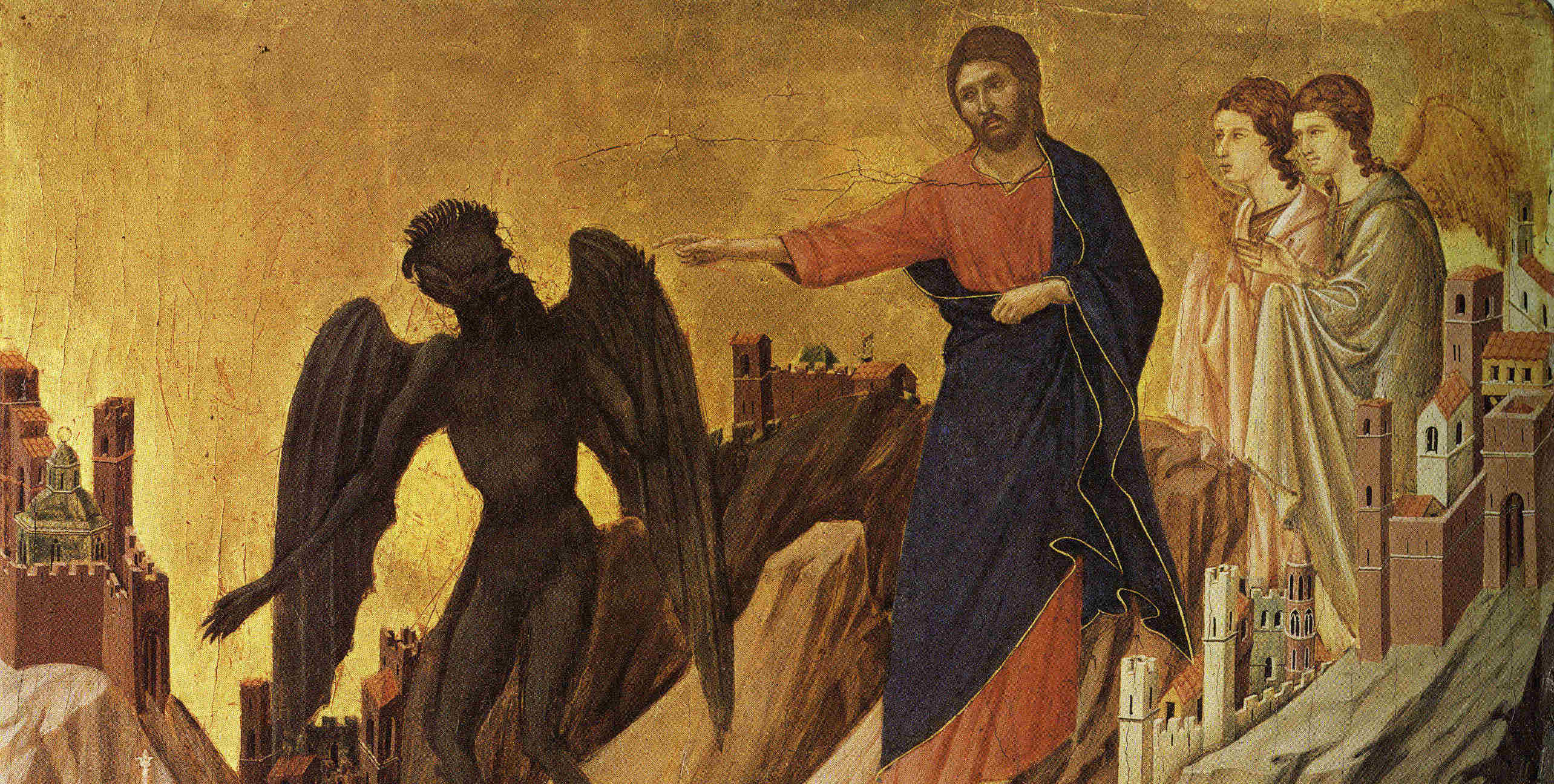 19 Apr Reflections on the Temptations of Christ

Christ’s temptations in the desert are very familiar to us. They are perhaps a little too familiar; maybe we need to reawaken our sense of the strangeness, and also the depth, of what is being shown us.

For it is truly extraordinary, and at the same time highly significant, that the Son of God should have been able to undergo temptation. The Gospels tell us that it was so, and therefore, of course, we accept it. But are we able to enter into what we accept? We might think that this is impossible, because Christ’s temptations are a mystery, and mysteries by definition escape our comprehension. But this would be a mistake. Christian mysteries are not obstacles to thought, utterly resistant to understanding. It is true that we can never comprehend them, but we see this only when we make progress in thinking about them. A mystery doesn’t mean that there is nothing we can understand; a mystery is incomprehensible because there is too much to understand, not too little; however far we get, there is always more; mysteries do not prevent understanding but always exceed it: they are incomprehensible only because they are inexhaustible. And so it is with the temptations of the Son of God. They do not involve an all-too-familiar impossibility for thought, but instead invite us to an ever-renewed possibility of thinking more deeply.

At the heart of this mystery we find God and Man, on the one hand, and temptation and sin, on the other. Let us try to think about each of these in turn, and then try to bring them together.

First then, there is God and Man. In the Incarnate Word, God and Man are united. What this means is that the humanity of Christ reveals a Divine Person, the Son of God. We might say that Christ’s humanity enacts in human terms, in the terms possible to a human life, what it means to be the Divine Son. His humanity is the definitive and unsurpassable manifestation of Divine Sonship in the world; it is the eternal life of the Son transcribed or transposed into the language of human being. Whatever Jesus says and does, in other words, whatever He desires and whatever He undergoes, constitutes the Divine Son’s unique human self-expression. The consequence of this is that in Christ there is nothing merely or purely human. He is indeed fully human, more fully human than any other human being; but in Him humanity and Divinity are brought together in the most mysteriously intimate of unions. Everything human in Jesus is simultaneously shaped and directed as the self-disclosure of the Divine Son.

Now this has a profound implication for our thinking about Christ’s temptations. Christ’s human experience of being tempted, and His human experience of overcoming temptation, must both in some way belong not just to the humanity of Christ but also to the self-expression of the Divine Son. We cannot say that the Son of God as God was tempted, or that as God He overcame temptation. But neither can we say these things of His humanity and leave it at that. Because of the Incarnation we must also say that there is something in the eternal life of the Son that gets expressed or revealed in Christ’s temptations and victory in the desert. God is not unrelated to the experience of temptation and its overcoming: the Divine Son is related to this experience by expressing Himself in it and through it. Meditating upon the desert experience of Christ’s humanity, we can say that there is something in the Divine Son, something therefore in the very life of the Trinity, which, if it is to be manifested in human terms, will look like this. The Incarnation means that even temptation can become a human expression of Divine being.

This may seem so paradoxical as to prevent any further reflection. But in fact we can enter more deeply into the mystery by turning now to think about temptation and sin. And first of all we have to distinguish them: temptation is one thing, sin is another. If we identify them, making temptation and sin into one thing, or even if we say that in some way they essentially overlap, then the temptations of Christ will confront us with an impossible dilemma. Either we will have to conclude that our Lord, because He was truly tempted, must therefore have experienced sin, or we will have to say that, because the experience of sin was impossible to Him, therefore true temptation must have been impossible to Him as well. Neither position is acceptable. But if we keep temptation and sin distinct, then we are enabled to see that it is not sin that tempts us, in temptation we aren’t drawn and attracted by something bad in itself, but rather what tempts us is always something which, considered in itself, is in fact good. And from this it follows that in trying to understand the temptations of Christ, we don’t have to face the impossible dilemma. Christ, we believe, entered into our state of temptation. But this means, not that He was tempted by what is bad, but that He was tempted by what is good.

This idea, however, has its own difficulty, and may even strike us as profoundly mistaken. If at the heart of every temptation, as the thing that draws and attracts us, there isn’t something bad but actually good, then it may seem inexplicable why we should ever regard such experiences as temptations in the first place. Surely it is no temptation to be drawn and attracted by something good?

But the answer to this is that it can be. When the good thing that we want can only be had, here and now, in a way which also involves doing something wrong, then it is that we experience temptation. For even though it isn’t the wrong that we might do that is drawing and attracting us, but only the good upon which we are focussed, nonetheless we can be so focussed on that particular good that we might actually decide that the wrong is – as we say – a price worth paying. And that is precisely the tempting thought. It is the possibility of deciding that wrong is a price worth paying that tempts us: the possibility of deciding that the good can justify the bad, or if not justify it then at least override it, or entitle us to be indifferent to it or ignore it. Temptation, in other words, doesn’t involve wanting the bad instead of the good; nor, of course, does it involve wanting the good instead of the bad – this is what we should want all the time; temptation involves, very precisely, wanting the good in spite of the bad.

But until what we desire turns into what we do, there is no sin. There is no sin in being drawn to a good in such a way that, in order to get it, we experience the possibility of doing something bad. Sin arises only when we move from the possibility of doing something bad to actually doing it. Temptation is the experience of possibility, more or less strong; sin is the actuality. And that is why our Lord could be truly tempted, and at the same time truly not sin. For in being attracted to the good, He never accepted or decided that the good which drew Him made the bad which tempted Him a price worth paying.

But the alternatives would mean that Jesus would have to stray from the way marked out for Him by the Father, abandoning the demands of love and obedience in order to summon up His own route to what the Father has asked of Him, rather than waiting to receive everything from the Father’s hands, precisely as the Father wills to give it, in complete detachment from His own will, surrendering to the will of the Father alone. Our Lord’s temptations then, in solidarity with ours, consist in grasping the possibility of achieving good things but in ways which involve deviating from the path which the Father has set before us. In solidarity with us, Our Lord endures and overcomes temptation by living through the truth that no good, however great or imperative it seems, can compel us to set aside what the Father asks of us.

And here we can begin to see a little better how even the experience of temptation can become an expression of Divine Being. In His experience of temptation, or more precisely in His experience of overcoming it, the Word Incarnate expresses, in human terms, His eternal dependence on the Father, from Whom, in being eternally generated, He receives everything He is. But what gets expressed here, the eternal dependence of the Son on the Father, is also eternally free: it isn’t something which the generation of the Son imposes on Him, something He necessarily undergoes at the Father’s hands; what the Father freely gives, the Son freely receives and returns. No compulsion or subjugation is at work in the Trinity, but only the transcendental freedom of Love, lying entirely beyond either the arbitrary or the necessary. And here again we can begin to see the way in which our Lord’s temptations are capable of expressing Divine Sonship. For the human experience of temptation demands freedom, the possibility of going the way of sin or the way of Love, and it is only in relation to such freedom, inscribed in the very heart of temptation, that the way of Love as a way of enduring and overcoming our trials becomes possible. So when Christ conquers temptation, He embodies and expresses, in human form, not only the eternal dependence of Filial love, but also its eternal freedom. In an utterly mysterious way, Divine Love binds itself freely, and it is this freedom which translates itself into the determination of the Incarnate Word to resist temptation.