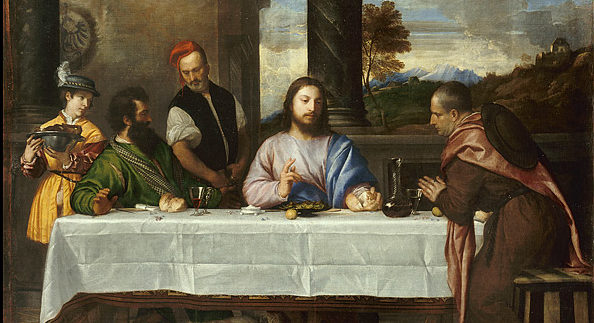 15 May Reflections on Another Kind of Seeing

He who has seen me has seen the Father. How is it possible to see one person by seeing another? Common sense would seem to say that either they must be the same person, or your vision of the one will obstruct your vision of the other. Now the Son and the Father are not the same Person, but different – in fact, as Divine Persons, they are infinitely different, albeit also infinitely united. Yet, on the other hand, we have Christ’s own testimony that seeing Him does not obstruct the appearing of the Father, but in fact manifests the Father. We are being told that in some way we see the Father in seeing the Son: that the Son, though infinitely different from the Father, is nonetheless the One in Whom the Father comes to visibility. But how can this be?

To make progress with this question, we have to understand that when Christ speaks of ‘seeing’ in this context He isn’t referring to something we can grasp by analogy with the ordinary event of physical or mental visibility.

In physical or mental seeing, something which is exterior to us becomes an object for us: we see it across a distance which separates it from us, we pick it out from among the other objects which might claim our attention, and we concentrate on it, either by looking or by thinking, all the time aware of its removal and its difference from us.

But in contrast to this way of knowing things, by seeing objects over and against us, there is another kind of seeing, the best example of which is the way in which we know ourselves. When we know ourselves, there is nothing exterior to us that we see, no object which we apprehend across distance and difference. Instead, we know ourselves by knowing ourselves knowing, in an intimacy to ourselves which doesn’t introduce any separation between ourselves and something else, but contains within itself both seer and seen, knower and known, in a kind of union which cannot be broken open.

Now I think it is in something very like this sense that Christ speaks of ‘seeing’ in today’s Gospel. When He says that we see Him or see the Father, He doesn’t mean that He and the Father are apprehended as objects exterior to us, grasped in their difference from us either by the eyes or by the mind. What He means, by speaking of seeing and knowing the Son and the Father, is much more like what is involved in seeing and knowing ourselves: in other words, seeing and knowing what is too intimate to us ever to become an object – as intimate to us, in fact, as our own being and existence, which does not unfold in a space beyond us, but in the very space which is interiorly our own and, only from there, opens outwards.

This is how He shows Himself to us: not as an object beyond us, living His own life in distance and difference from ourselves. His presence to us is much more intimate than that, too intimate to be seen as an object apart from us. He makes Himself present to us as the inwardly unfolding pattern of our own lives.

We should think of this mysterious presence to us in Eucharistic terms. For a time, it is true, He is present to us in the consecrated bread and wine in the way in which an object is present to us – that is to say, apart from us: in the tabernacle, or on the altar, or in the monstrance. But His presence in this way is a presence in transition – it is always moving towards the moment of communion, when He disappears, as an object, and takes up His dwelling within us, nourishing and transforming us interiorly, so that His life merges with our own.

And only then do we really see Him – when He is no longer visible, before us, but has become, for us, filial life unfolding itself within us. That is the point at which He can truly be seen and known by us, for that is what He most truly is for us: the life of the eternal Son poured out into the life of the world.

And when that life is communicated to us – preeminently in the Eucharist, and also in the other sacraments, and in prayer and suffering and in the whole life of Faith, Hope and Charity – when this communication is granted us, then we know ourselves, not just as sons, but as sons of the Father. It is then that not only the Son, but also the Father, comes to visibility for us. The Father is shown to us as the One from whom we, as sons, receive our existence and our life; and He is shown to us as the One to whom, as sons, we are called to hand back the existence and life we have received.

From Christ, then, we receive the life of sons; and, in living the life of sons, we find in ourselves also the life of the Father, as the ultimate origin and completion of our filial existence. With Christ, from Whom we receive filial life, we are drawn by Him into Paternal life, the life from which Christ Himself comes, which sustains Him, and to which He returns. In company with Christ, we too can say what He says in today’s Gospel: I am in the Father and the Father in me.