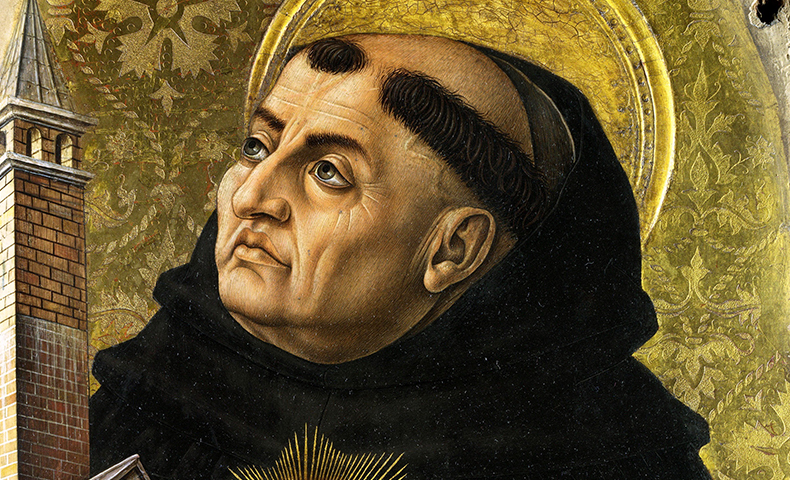 24 May Reflections on the Certainty of Faith

St Thomas Aquinas, reasoning about Faith, asks at one point a very fundamental question: how is it that we believe at all? For we don’t, Aquinas insists, see what Faith teaches, as we see things that we know; and yet he also claims that believing exhibits certainty, which on the face of it only seeing and knowing could justify. How is it, then, that Faith’s seemingly unaccountable certainty comes about?

Aquinas’ answer to this question unfolds on several levels. Firstly, he tells us that Faith is certain because it is God Himself Who reveals to us what we believe. The certainty of Faith, in other words, is not a matter of what we know: it is rather an effect within us of what God knows. Faith is like being certain of something, not because it is visible to you, but because you stand in the shadow it casts to embrace you. Such certainty is a kind of darkness, but the darkness is legible and fertile because of its congruence with the light which makes it possible.

This account beautifully elucidates how it is that Faith is simultaneously security and dispossession. What Faith knows isn’t ours to know, it doesn’t arise from exerting any kind of innate cognitive muscularity. In Faith we find certainty, security, only by inhabiting a very radical kind of dependency. In Faith, as in being loved, we are sustained by the insights of another.

Being sustained in this way involves what we can think of as being suspended. As we have seen, Aquinas thinks that what God knows mysteriously enters into us, suspending us over the depths of our own un-knowing. But as this point, according to Aquinas, our suspension over these depths is intensified. For we do not see ourselves suspended in this way: we cannot know that this is what is happening to us when we believe. That this is happening to us is itself one of the things that we must believe.

So as far into believing as we can go, we find ourselves dispossessed of knowledge, seeing and knowing nothing of our situation, but having to believe everything that defines us as believers. Our feet never touch solid ground – not, at least, if solidity is defined as something we can know for ourselves.

And that is because Faith doesn’t commence intellectually, in what we know, but in the domain of freedom, in what we choose. Humanly speaking, Aquinas thinks, the most fundamental answer to the question how we believe is that we do it by choosing to believe.

This answer perhaps disconcerts us: the idea of choosing to believe brings sharply into focus the possibility of choosing otherwise. And we might want to banish that possibility by saying that it is by grace that we choose to believe, as if by invoking grace we can reassure ourselves that there is no choice on our part after all, and our believing is, by Divine fiat, something guaranteed. But grace does not and cannot replace the human dynamics of choosing. If, as Aquinas tells us, it is under the influence of grace that we will to believe, then there must be a human story to be told about how that happens: a unique story, indeed, each and every time it happens. And nor should we imagine that for each person it happens only once, in some remote and by now irretrievable moment. The will to believe is, on the contrary, a persisting and active presupposition of the life of Faith.

So we must not try to mystify the truth that in a very fundamental way our freedom is engaged. To Aquinas’ mind it is essential that Faith be a movement and expression of our freedom. For this is what makes Faith personal, in a way that – at least for Aquinas – knowing something can never be. Knowing, on his view, is a kind of reception of what’s there, regardless of what you want or how you feel about it. But what you choose, on the other hand, is deeply implicated in what you love and what you desire; and what you love and desire originates and shapes very intimately who you are. The act of Faith – not what is believed, but the very believing itself, and all that choosing to believe entails – is aligned there, in the subjectivity, the heart, of the believer.

This is what counter-balances the dis-possessive aspect of Faith, the fact that, as we have seen, in Faith we live out a very radical kind of dependency. However radical, such dependency is also freely embraced: Faith, paradoxically, is a sustained will to be configured to what utterly surpasses us.

Christianity draws us through the Incarnation. What draws us is God becoming man, entering into our life and bearing our burdens, even the burdens of death and of hell, and, having borne them, arising from them, embodying in His flesh and communicating to ours a pattern of life which is both human and Divine, opening up for us the meaning of God, and therefore the meaning of ourselves and of all creation. This is what draws us and explains why each of us is here today: each of us, in essentially personal ways, desiring to be placed within the circle of attraction and transformation which the Incarnation promises. We do not know what we are doing; we are responding to the instinct, the intuition, that this is what makes sense.

We are drawn because the Incarnation promises to make sense of what it means to be human; drawn because we are in love with the idea that everything can be elucidated and irradiated by what Christ in His mysteries discloses to us. And that means that every expression of human thought, of human desire and human experience can be brought into definitive relation to the Incarnation, can be either affirmed or transformed – or rather, affirmed and transformed – in light of it. None simply falls outside it, for there is nothing human which the Son of God did not take to Himself, and nothing which, in taking to Himself, He did not thereby interpret and resolve.

To live with the risk of this belief is one of the most important ways in which the certainty of our Faith discloses itself. We do not make progress in its truth – or we do so only very imperfectly – by comfortably inhabiting only territory which we judge in advance to be consistent with it. The certainty of Faith grows rather with its readiness to encounter, in ourselves and in others, whatever apparent objection or contradiction, whatever seeming anomaly or dissonance, there might be, faithfully seeking and awaiting the grace of the Incarnation to show itself capable of making sense of it. It is in the will to sustain such seeking and awaiting that the certainty of our Faith unfolds within us.