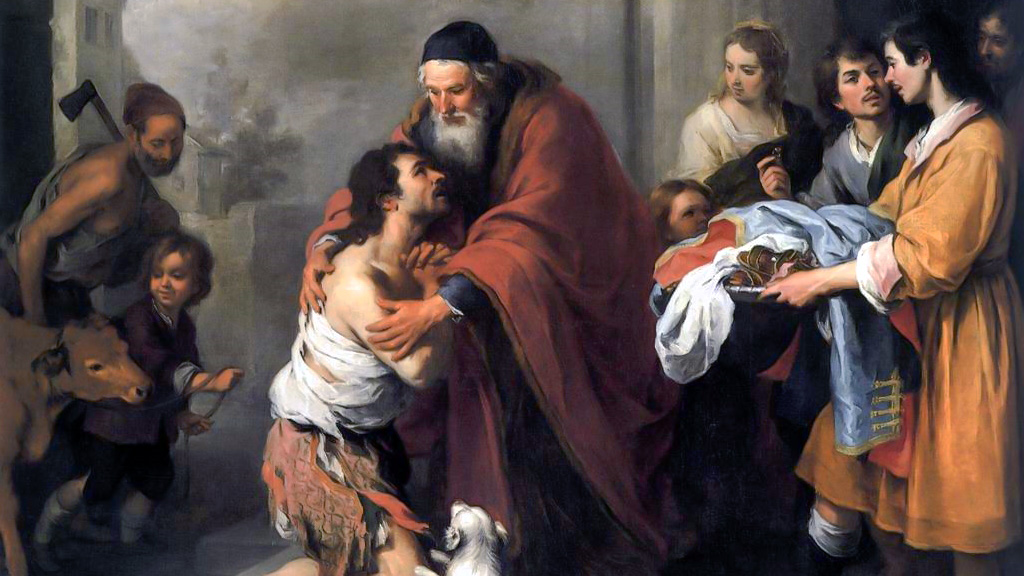 31 May Reflections on Forgiveness

The parable of the prodigal son insistently and rigorously expounds for us the meaning of forgiveness. The meaning is there in the two words which forgiveness conjoins: the word fore and the word give. Just as foresight is seeing beforehand, and foreknowledge is knowing in advance, so with forgiveness: it is to give beforehand and in advance. Forgiveness always speaks the words which the elder son hears from his father: Son, you are always with me, and all that is mine is yours. Forgiveness tells us that everything is always and already given us.

Those words, spoken to the elder son – you are always with me, and all that is mine is yours – are often treated as subsidiary to the meaning of the parable, in which the emphasis usually tends to fall on the drama of the younger son’s wandering and return. But on the contrary, the words are crucial to the parable as a whole, and the two sons, though of course different in certain ways, should at the deepest level be treated interchangeably, for a reason that will appear towards the end.

Let’s try to think this through in terms of the practice of going to confession. In confession we recount our sins, express our intention to avoid them in the future, and receive forgiveness for them. Now what does it mean to say that we receive forgiveness? It means that we receive the gifts that have been awaiting us, always already given but arrested by our preceding failure to accept them. In receiving forgiveness we bring about the completion of God’s gifts to us, acknowledging as gifts what God has always already given.

Receiving forgiveness, then, is both a reminder and a renewal. It is a reminder because it returns us to what has already been handed over, recalling us to an acknowledgment of all that has been given us. And it is a renewal because in this return, in recalling and acknowledging the gift, we re-orient ourselves towards the truth of being gifted, with the intention of abiding in that truth from now on.

This implies something that may at first confuse us. It implies that when we receive forgiveness we are not, strictly speaking, being given anything new. And in an important sense that’s true. In receiving forgiveness, what is new is the receiving, not the giving. We receive anew what was given before. Son you are always with me, and all that is mine is yours. We find ourselves forgiven not when we receive something new, but when we re-orient ourselves towards gifts which God has already handed over to us.

And of course this emphasis on what God has already handed over doesn’t point to any kind of restriction: it doesn’t mean that God is withholding something, confining us solely to the gifts of the past. If there are no new gifts to give, this is only because God has given everything already. Creation, Redemption, Sanctification – everything, without reserve, has already been given us. God gives unreservedly, and so we are, already, unreservedly gifted. All that remains is the question of our reception of His gifts. And this is quite simply what the Christian life is about. The Christian life – the life of Faith, Hope and Charity – entirely concerns our orientation, and sometimes our re-orientation, towards the fullness of what God has given us.

Reorientation is sometimes necessary because, in various ways, we refuse or deny the gifts of God. That is what sin means: refusing and denying God’s gifts. More concretely, it means failing to receive them as gifts. The last two words are crucial. In sin we fail to receive God’s gifts as gifts. But what does that mean?

And yet, despite His unconditional giving, the question remains: Do we truly receive everything from Him – that is, do we live His gifts in conformity to the givenness which endows us? Do we, in other words, receive everything from Him as a gift? Sin means that we do not, and that is why it is necessary to receive forgiveness. In sin, what begins, from God, within the logic of the gift becomes, in us, diverted from that logic into something to be possessed and manipulated, used or abused as we like, deployed or withheld solely according to the counter-logic of self-interest.

Think of the younger son in today’s parable. First he denies and alienates himself from the givenness of the Father’s endowment of him, by demanding it, according to the logic of entitlement, and then seizing hold of it, according to the logic of possession: ‘Father, give me the share of property that falls to me’ [and] not many days later [he] gathered all he had and took his journey into a far country.  There – in a distant land whose distance measures his own estrangement from the logic of the gift – he squandered and spent everything. Such dissipation follows ineluctably from his degradation of gift into possession. For once we cut ourselves off from the filial poverty of receiving, we enrich ourselves only at the expense of limiting ourselves to what we already possess; driven by the logic of self-enrichment to exceed this limitation, we are then compelled to trade with what we have in order to add to what we cling to; but the finitude of our resources ensures that sooner or later they will run out, leaving us still desiring abundance but destitute of any means to acquire it. And when he had spent everything, a great famine arose in that country and he began to be in want. Such self-imposed starvation, craving to possess what has already drained away, may or may not complete itself while we are still alive, but it will inescapably complete itself when we die. Indeed for one who would possess rather than receive, death haunts him always, as the unavoidable unmasking of the impossibility of how he lives. Death, the final depletion of possession, tells the unavoidable truth of his choices; and so, even when he is alive, death has always already undone him. That is why, after the younger son’s return, the father can say ‘make merry and be glad, for this your brother was dead,  and is alive’ – he was touched by death, even though he lived, but now he draws from what will make him alive, even though he must die. There is only one way to effect this transposition: to convert from the dwindling finitude of possessing to the inexhaustible finitude of receiving. From having pursued self-enrichment in a land where, as we are told, no one gave him anything, the younger son stirs himself and retrieves, at first unsteadily, the truth of his filial dependence: I will arise and go to my Father.

In sin, then, we fail to follow the path, the trajectory, of the gift, we abort it, sealing it up in ourselves, denying its truth and its aspiration. And so repentance is to be understood as a return to the truth of the gift, a renewed will to live according to the overflowing logic of Divine generosity. From the untruth of sin, its confinement and distortion of the gift, we find our way back, through receiving forgiveness, to the truth of our belonging.

And so we have to say something which may at first seem surprising. It isn’t our repentance that produces forgiveness: God doesn’t recognize our repentance and therefore offer to forgive us. On the contrary, it is His forgiveness that produces our repentance: it is we who recognize God’s forgiveness and therefore offer Him our sorrow for having abused it. When we confess we don’t extract forgiveness from God, as if forgiveness were His side of a contract, which He fulfills only when we say sorry. In saying sorry we don’t prompt forgiveness but acknowledge and receive it anew, because beforehand we had denied and refused it. But forgiveness was there all along, precisely as the name implies. It is a giving that is already given, is always before us, always ahead of us, always here, always now. But while he was yet at a distance, we are told, his father saw him and had compassion, and ran and embraced him and kissed him. We are seen before we see, desired before we desire, welcomed before we show ourselves. All we must do is encounter this or, when we repent, re-encounter it, finding it again after having lost what was always there. Repentance is simply our rediscovery of God’s ever-present gifts.

Before trying to answer that, we need to come to terms with what I described earlier as the interchangeability of the two sons. It consists in the fact that the elder son, despite what we might at first think, has enacted essentially the same defection from the logic of the gift as his younger brother. It’s true, the elder son’s defection has taken a different and more respectable route. ‘Lo, these many years I have served you, and I never disobeyed your command.’ And yet his very fidelity has culminated in the same alienation from givenness, the same self-assertive sense of an entitlement to possess, the same melancholy self-denigration.

Let us look at some of the ways in which this affinity between them expresses itself, as a dismal substitution for their true kinship. When the younger son begins the return to his father, it is at first very ambiguously. For one thing, a resentful sense of exclusion seems to underlie it: ‘How many of my father’s hired servants have bread enough to spare, but I perish here with hunger.’ Even more significantly, the horizon in which he thinks is that of servitude: it’s with the servants that he instinctively compares himself, and it’s as a servant that he imagines returning to his father’s estate – paradoxically, of course, since in reality he is a son, not a servant, and is returning to a father, not to a master. Nonetheless these are the only terms in which he can at first consider things: ‘I will arise and go to my father, and I will say to him, ‘Father, I have sinned against heaven and before you; treat me as one of your hired servants’’. But the elder son seems to share this same horizon: ‘Lo, these many years I have served you, and I never disobeyed your command.’ And what’s more, a resentful sense of exclusion seems also to be at work in him. We find him labouring, distantly, in the field, and when he draws closer in he can only stand angrily apart from the music and the dancing that greet him. That this is more than a reaction to the celebrations at his brother’s return is shown by the fact that he has clearly been estranged from his father for some time, living obediently to him, yes, but – as far as intimacy is concerned – identifying with a different world than the paternal household: ‘you never gave me a kid, that I might make merry with my friends.’ And of course he notoriously cannot share in the father’s delight at the younger son’s return: estrangement from the father means also estrangement from fraternity: ‘But when this son of yours came, who has devoured your living with harlots, you killed for him the fatted calf.’

The interpretation I would like to suggest is that, if the younger son stands for what might be called a worldly loss of filial belonging through the lovelessness of sin, then the elder son stands for what can be identified as a religious loss of filial belonging, expressing itself in an uncharismatic fidelity which itself is devoid of charity. Both alike recede from the father and from their own sonship, from the true reception of the father’s gift that would ask of everyone only that they would creatively enact a repetition of its un-self-regarding generosity.