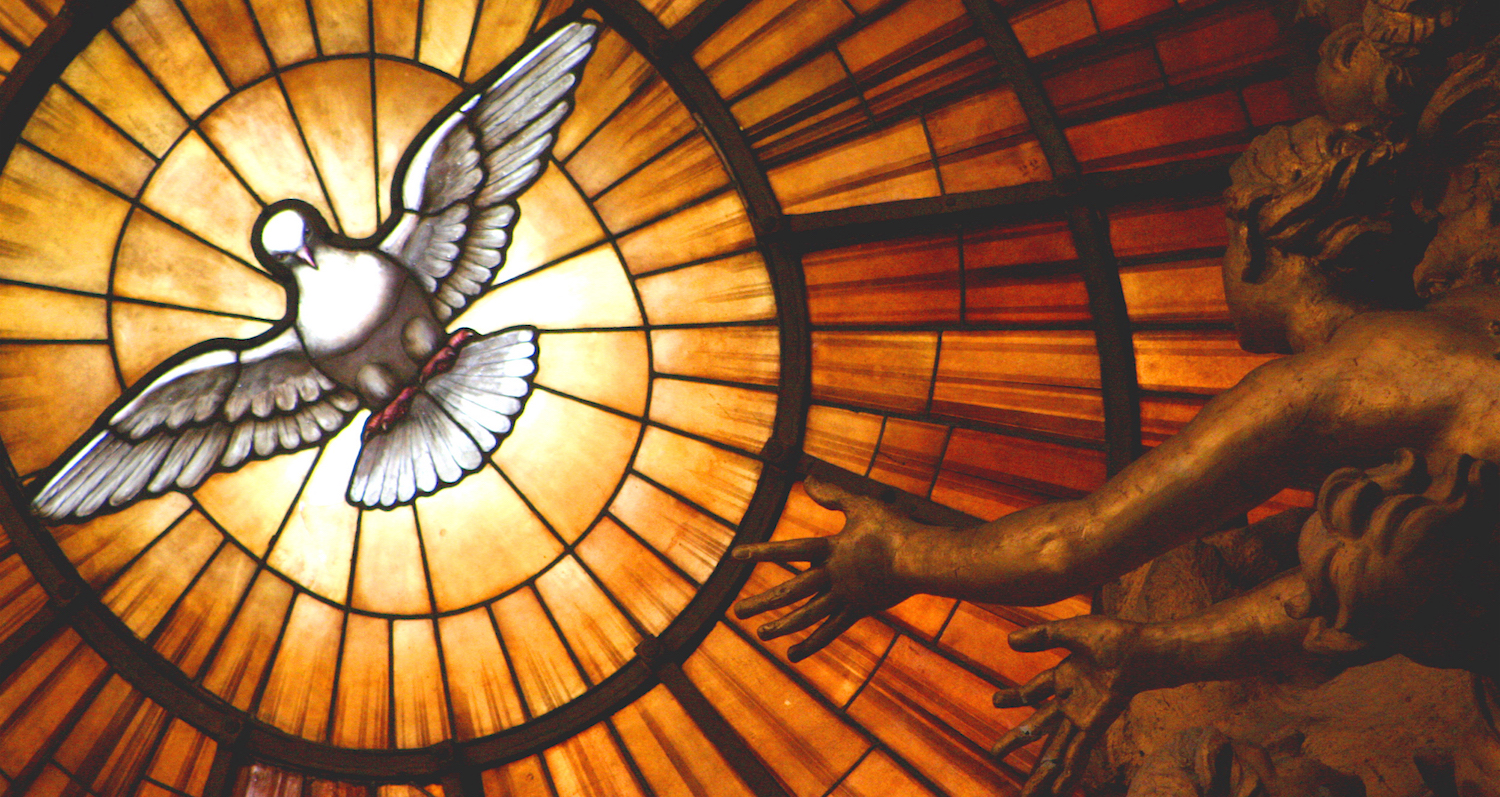 09 Jun Reflections on the Holy Spirit

We do not really understand what we say to each other. The words that we share are not our own, but are given us in a language that pre-exists us, and so our words have meanings and usages which we have to learn in order to be able to speak at all; and none of us ever fully or completely learns them, comprehensively understanding all the possibilities, the depths of signification and range of employments, which our words contain. Of course we do to some extent inhabit these depths, we have some kind of foothold, we learn enough of a language to get by, even sometimes to speak imaginatively and creatively within the languages which endow us. But always our words possess a richness which exceeds us, a depth in which we participate but which we cannot master and transcend. Our understanding of what we say plays mostly on the surface or in the shallows, while the oceanic currents of meaning circulate all around us, suspending us by encompassing us.

The reason for this lies in the obscure relation that exists between language and life itself. If language always exceeds us, if there is more meaning in what we say than we can ever comprehend, this is because language expresses life, and life itself is more than we can ever know, our understanding overwhelmed by a depth and intensity in even the smallest details that are closest to us, let alone the densities that ramify and recede indefinitely around and beyond us. If language always exceeds us, there is a second and vaster excess in the life of which language endeavours to speak, an incomprehensibility always latent in the patterns of being and acting in which we participate but which we cannot fully appropriate or possess through understanding. If we are incapable of comprehending what we say, this is because we are incapable of comprehending what we do and, most of all, what we are.

Which is bad news, of course, if comprehension is the point of it all. But maybe it isn’t. Being, doing, saying – perhaps these become viable (or should we say, bearable?) only if we consent to participate in them beyond striving to comprehend them, but instead living them as gifts which exceed us, freely admitting us to a mysterious sharing in an unthinkable endowment, contrary to every impulse towards founding them in ourselves, possessing them and exercising sovereignty over them. We can correspond to them only by receiving them and by giving them. What we are, what we do, and what we say – these must become, in us, the gifts for others that they are for ourselves.

Because of this, we might want to say that contemplation must give way to action, understanding to practice. Certainly we are not called to stay still, acceding to the immobile solitude of an impossible comprehension; instead we are called to move, enacting the passage of what is given to us by letting it move through us and beyond us towards others. But, in this movement, understanding and the true meaning of contemplation are not forgotten, they are simply properly situated. Only in living the movement of the gift do we attain to a certain contemplation or understanding – not as something prior to movement, or as the conclusion of movement, but instead arising from it and in the course of it. We understand, as much as we need to, by doing; we contemplate, as far as is necessary, by acting. Knowing completes itself in willing, and Faith in loving.

And this is the insight we need in order to enter into the mystery of Pentecost, the gift of the Holy Spirit. For the Spirit is the gift of life lived as the movement of love, of being and doing and saying enacted as charity, passing into us, through us and beyond us. Bearing the gifts of contemplation which love alone makes possible, the Spirit is given in order to open us to a living correspondence with what has been afforded us in creation. And creation is the always excessive gift of a love with which we can come to correspondence only by allowing ourselves to be changed, converted, so as ourselves to become idioms of that same love, each of us expressing it in the unique way to which she is called. For in the gift of creation the Spirit was first given us, as the communication of a love from which we have subsequently wandered; and now the Spirit is given again, as a fresh insistence upon the gift of love in which we are asked to participate; and the new creation, which is the renewal of the Divine vision in creating first of all, can be performed and perfected among us.

And here too, and more than ever, there is that double excess, of speech and of life, calling us, according to the gift of the Spirit, into participation beyond comprehension.

First of all, an excess of speech: – The outpouring of language, of saying, which the Acts of the Apostles records in narrating the gift of the Spirit – this abundance of meaning can be read as the commencement of Christian discourse, the speech which over-flowingly expresses the works of God in the texts of the New Testament, in the Creeds and dogmas of the Church, in theology, in prayer, in conversation – and even in homilies. But all this speech in the Spirit, this strange and varied loquacity, doesn’t amount to final comprehension, an achieved plenitude of meaning transparent to the consciousness of the speakers. On the contrary, the excess of language over understanding, which is always in play, even when we try to express the world, here reaches a kind of climax, when we are moved to try to express God. Here, least of all, do we understand what we say; here, most of all, the meaning of the words we use exceeds anything we can definitively learn and appropriate. As before, we are accorded points of orientation, footholds, in words which have an unsurpassable authority for us. But the depths of meaning, the horizons of possibility, which these words disclose is exceeded by what they keep hidden, which is the reason why Christian speech is endlessly re-spoken, never exhausted, handed on but at the same time always renewed – not because it is already sufficient, or could one day become so, but precisely because it is always insufficient, insufficient even in its truth, precisely because its words are words towards God.

And secondly, here again, the excess of what we say is rooted in the excess of what we live. For Christianity is of course first and foremost life itself – not a set of beliefs, or of propositions expressing those beliefs, nor even an identifying set of practices such as frequenting the sacraments or performing devotions. It includes all these things, of course, and more; but what it essentially is, according to an essence which we can never comprehend, is a participation in Divine life itself, an incorporation, even now, into the mystery of Trinitarian communion. And we do not inhabit this intermittently, only when we rouse ourselves to religious thoughts or practices, but continually, in waking and in sleeping, just as our very lives are lived – but now, according to a new indwelling which we do not control and may not experience at all, as something distinctive. Instead we may find, over time, that our experience itself is changing, the ways in which we relate to ourselves and to others, and not because of anything we have brought about, at least not executively and decisively, but rather because of what is being brought about, incomprehensibly, within us and between us. And this will be the unfolding of our own lives, mysterious as they always are, into the even more mysterious participations afforded us in Divine life.

And what this means is that we are beginning, once again, to live as children of the Father, sharing, even in our finitude, in the infinite gifts which the Father pours out upon the Son, and conformed, even in our finitude, to the Son in His infinite correspondence to all that the Father gives Him. And this sharing and conformity, the ground of the abundance and the excess of all that we can be or do or say, is the gift of the Spirit, the gift of the Love that is the communion of Father and Son with each other and with the world.