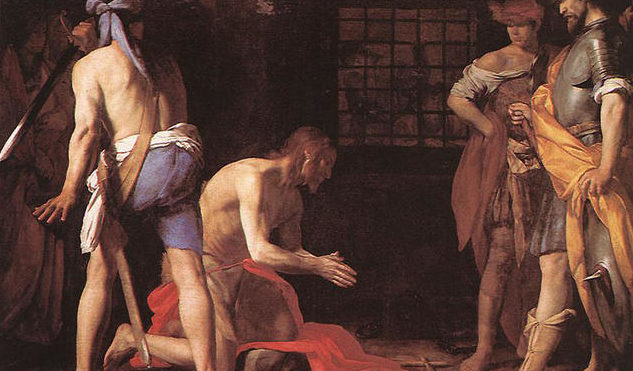 21 Aug Reflections on John the Baptist

Concerning John the Baptist we are told that “the people were in expectation, and all men questioned in their hearts concerning [him], whether perhaps he were the Christ.” And yet, in at least one Gospel, the very first words which we hear the Baptist speak are: “I am not the Messiah…” In the space between these affirmations – between, on the one hand, John’s manifest charisma and, on the other, the urgency of his testimony beyond himself – exists what can be considered a paradox of Christian life, of what we call, mysteriously, life in Christ.

John fully, and therefore irresolvably, inhabits this paradox. With his own presence and authority he desires to manifest, not himself, but the presence and authority of Christ. His first words are words of negation, and what he seeks to negate is, precisely, himself. John cannot but see himself, his own personality and teaching, as inescapably too tangible and obtrusive for the meaning which he is charged to convey. That meaning is Christ, and Christ alone. As he says: “He must increase, but I must decrease”. If there is to be presence, then surely it must be only the presence of Christ Himself; if the meaning is Christ, how can there be other meanings, how can there be persons other than Christ showing themselves, without Christ somehow, at some level, being forced to yield, to give way, to share with others the horizon of attention and contemplation?

And yet John the Baptist, who knows nothing more urgently than that he is not the Christ, is nonetheless sent, commanded, to speak – for no one else knows what he knows, or can utter what is his. It is this apparent impossibility, John’s paradox, of which we hear when the Gospel tells us that the Baptist, the “man sent from God”, was not himself the light, but was sent and came to testify to the light. To be one who ‘testifies’ is surely to be somehow a light oneself, as Christ indeed says of the Baptist: “he was a burning and a shining light, and you were willing for a season to rejoice in his light”. But how, then, can John’s own light, the light of his unique testimony, fail to compete in some degree with the light to which it testifies? John has to speak, and yet he knows that the sense which his words must bear risks being obscured precisely it is his sense, framed in his words, issuing with mysterious but distracting fascination from himself.

And so it is that, even though he is compelled to speak, he wants to be heard impersonally, even unidentifiably, simply as a Voice rather than as a presence, as a Voice that in fact sounds precisely in absence, unattributably, from the “wilderness”, the uninhabited beyond, unknown and unknowable as himself. But even in that aspiration the paradox repeats itself. Perhaps even words themselves are already too obtrusive, imposing themselves and distracting from the realities to which they point. Even from the wilderness John aspires not so much to speak as to cry out – “I am the voice of one crying out in the wilderness: make straight the way of the Lord”. Do created words, too – even hallowed words, sacred words, words such “as the prophet Isaiah said” – risk attracting too much attention to themselves, demanding to be analyzed, poured over, weighed and appreciated as language, so that what is really needed is perhaps just an inarticulate sound, a cry, a vanishing point weightlessly bringing into view only that which elicits it?

Philosophers, ancient and modern, have sometimes entertained the idea that it is existence itself in which original sin, or something very like it, consists – as if being other than God were already to be inescapably estranged from Him. In Christianity, this idea is mistaken, unorthodox – but even so there is something valuable in it. The strangeness of supposing that being other than God is itself original sin at least reminds us that we cannot comprehend and domesticate our relation to God, in ways which simply take for granted that He exists and that we exist, and that together we interact as if in some intelligible and well-ordered cosmic household. Created things, including ourselves, do not inhabit the universe ‘alongside’ God, as if He were one – albeit very powerful – thing among all the other things which, we believe, He has for some reason brought about. The fact that anything at all exists which is, in some sense, ‘other’ than God is in fact deeply mysterious, above all because what it means to say that something ‘other’ than God exists is deeply mysterious.

We can bring this into focus, perhaps, by means of a question. How can we ourselves, in our very being, and how can our words and our deeds, the things we say and do, ever show the truth about God, manifest the truth of God? This very fundamental question cannot be fully and completely answered simply by pointing to a well-regulated human life, a life of virtue, even of supernatural virtue lived in Faith and Hope and Charity. For even in such a life, something ‘beyond’ remains, a relation to God which cries out for realization in the inconceivable, surpassing anything we can grasp or co-operate in bringing about, anything that we can say or do or make ourselves be.

Christian tradition calls the inconceivable the place of contemplation, the place of union, and ultimately of course we call it Heaven. When mystical writers speak of this place, they do not imagine it as being given by means of a special grace supplementing the basic relation of the creature to God. They imagine it, on the contrary, as the place in which the basic relation of the creature to God is for the first time brought to light and elucidated. It is in union with God that the primordial truth about our relation to God is at last unfolded. One of St Theresa of Avila’s images for union as the un-concealing of this primordial truth brings before us the human self as a drop of water falling into the ocean. Such a way of speaking gets easily debased, and is readily misunderstood; but even when we have made all the qualifications which seem appropriate, we can’t conclude that St Theresa was speaking carelessly, or merely metaphorically – whatever that might mean.

St John the Baptist would, in his own way, would doubtless have understood. He yearned for the contemplative truth overflowing being and acting, for union with Christ not only beyond words and deeds but also beyond any kind of relation to Christ in the ordinary sense of the word ‘relation’, as the connectedness of two substantially distinct entities. Like St Paul, the Baptist desired to be dissolved, to be undone in the substantial distinctness of his being, and to find himself only in Christ. And this is only to point, beyond all conceptual precision, to the Christian vision itself – “I have been crucified with Christ; it is no longer I who live, but Christ who lives in me.” And in that sense the Cross is not a means to an end beyond itself, but instead the persisting, indeed eternal, form of Christian existence – eternal precisely because Divine – which is to be, beyond being, in Love.