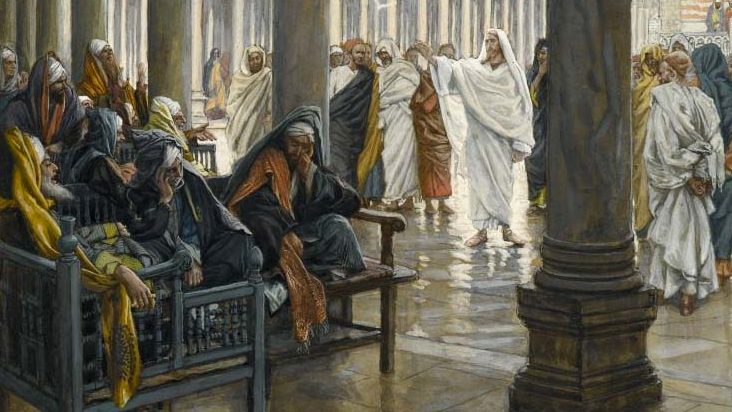 15 Nov Reflections on the Paradox of Grace

Then Jesus said to the crowds and to his disciples, ‘The scribes and Pharisees sit on Moses’ seat; so practice and observe whatever they tell you, but not what they do; for they preach, but do not practice’. And yet it isn’t just the scribes and Pharisees, of course, but each one of us, who must endure the difference that exists between what we profess and the lives that we lead. There are various ways in which this difference can be understood. One concerns sin and the way it divides us from what we believe. And this calls for conversion, in which we try to remove all that obstructs our openness to what God desires to give us.

But even when conversion is underway, there remains a difference between what we profess and the lives that we lead that can never be extinguished. And this remaining difference is positive, unlike the negative distance created by sin. It consists in the fact that Christianity professes in the end only God and our participation in God. And this means that the truth which Christianity professes is forever beyond us, in excess of anything we can take hold of and make secure within ourselves. Instead, the whole movement which Christianity inaugurates is in the opposite direction. In Christianity we are always drawn out of ourselves, more seized than seizing, and the Christian identity is always an ecstatic identity, a life lived as desire to share in what transcends us. And this means that the lives we lead can never simply coincide with the mystery in which we believe.

Grace and glory, in other words, are never human possessions, in which the mystery of God comes to rest serenely and securely within us. Instead, they give us a share in Divine life as kinds of movement across a distance which is never closed but always held open. This distance is essential, because grace and glory are forms of love, and love requires distance, it needs difference or otherness, precisely so that its destination may be something other than ourselves. Alternatively, we might consider the same point by remembering that grace and glory are both gifts, and gifts cannot be given unless, between the one who gives and the one who receives, a distance is  acknowledged and preserved. This alone prevents what is given from degenerating into something possessed.

Because they are love and gift, then, grace and glory can show themselves in their true colours only when we relinquish any notion of owning or possessing them. Instead we must think of them as constantly arriving, undeservedly and unforeseeably. We must remember that they enrich us only by alleviating a poverty in us which is never overcome. Our poverty remains, even when it is alleviated, so that we may come to understand more and more deeply the absolute dependence that alone belongs to us, and the astonishing freedom of the Divine love which graciously ministers to it.

And so the central Christian paradox comes into view. We are the more enriched by grace, the poorer we know ourselves to be. For, as we are told, whoever exalts himself will be humbled, and whoever humbles himself will be exalted. This paradox, of course, is what we see exhibited above all in the saints. Their intimacy with God through grace is in direct proportion to their understanding of their distance from Him in themselves. In common with us all, they speak of their own nothingness, their weakness and capacity for evil, though with a depth of sincerity and conviction that exceeds our own. What makes them saints is their correspondingly radical confidence in God’s love working in them and through them nonetheless. The saints are those who glimpse with the greatest acuity the difference between what they are, in themselves, and the grace which ecstatically inspires and sustains them.

But is this paradox, so essential to the saints, always rendered very clearly in the hagiographical tributes we pay them? We have tended to consider the saints as if grace in them has become resplendently co-incident with themselves. In much hagiography, it is as if God’s enrichment of them leaves no space for consciousness of their poverty, their struggles and their vulnerabilities. When this happens, their complex identities as real men and women seem to vanish, to be replaced by an exemplary two-dimensional visibility entirely constituted by virtues and miracles.

But the saints root themselves outside themselves, in God, attributing nothing to what is theirs.  And so St Philip himself warns us not to speak of the saints themselves doing wonderful things, but rather of the wonderful things that are done in the saints by God. We must be careful not to lose sight of the difference to which St Philip is pointing. We risk doing so whenever we accord the saints an elevation which emphasizes a conventional and simplified appearance of sanctity above the paradox of simultaneous poverty and enrichment in which real sanctity consists. When we make this mistake, it is as if we fashion for ourselves a version of the deceptive iconography described in the Gospel: They do all their deeds to be seen by men; for they make their phylacteries broad and their fringes long, and they love the place of honour at feasts and the best seats in the synagogues, and salutations in the market places, and being called rabbi by men.

Here we must remember that the scribes and Pharisees do not simply impose their self-aggrandizing rituals on a people unwilling to receive them. On the contrary, the people themselves obtain satisfaction from enacting elaborate deference to those who are placed above them. The forms taken by human respect are always a two-way street, running between the expectation of deference and its manifestation.

But our cult of the saints is not supposed to be like this. The saints are not idealized superiors occupying the summit of a social hierarchy. Instead all Christians inhabit a fundamental fraternity under God, which no differences between us are permitted to obscure or erase: …you are not to be called rabbi, for you have one teacher, and you are all brethren. And call no man your father on earth, for you have one Father, who is in heaven. Neither be called masters, for you have one master, the Christ. And the saints are those among us who are marked, not by a visible abundance of spiritual possessions, but instead by a poverty of spirit lived out in relation to the grace of God. This is a relation which, at the very least, is easily overlooked. More than that, it may not in any ordinary way be visible at all – to others, certainly, and perhaps not even to the saint himself.