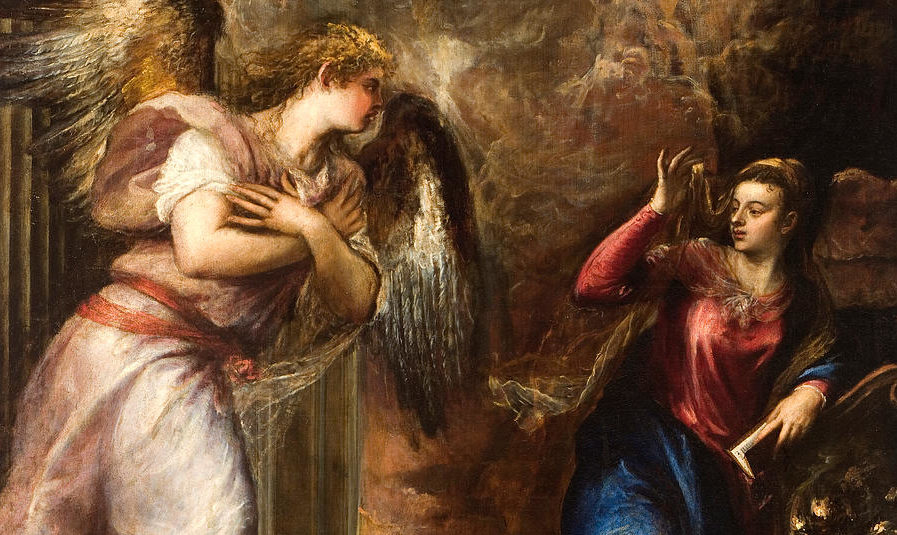 03 Feb Reflections on the Annunciation

The deepest thing about the Annunciation is shown in this: that Gabriel does not so much explain God’s plan to our Lady and ask her to co-operate with it; rather, he accords her a potent, but nonetheless fragmentary and mysterious, intimation of what God means to bring about, and she, drawn into the beauty of it, finds herself absorbed. We go wrong, in other words, if we interpret the Annunciation in a way which makes everything too explicit, too brightly lit. We go wrong if, for example, we lend excessive emphasis to our Lady’s understanding of what the Angel tells her, and to her freedom in choosing to co-operate with it.

I don’t mean that we should say that she understands nothing, or that she gives her assent blindly or irrationally. But in the Annunciation, Mary is permitted to glimpse the beauty of God’s purposes, and her response is to love the beauty she is shown. Now when we are in love, how much do we understand? And how free are our responses? The answer, I think, is that we in some sense understand what we love, and are in some way free either to stay put or to turn away. But surely neither understanding nor freedom is uppermost in the experience of love. To be in love is characterized less by what we already understand, than by our desiring to know more, and more intensely, and more completely; and rather than maintaining some absolute power of self-determination, love shows us that, in order to love as we desire, we must in fact freely surrender ourselves, including our autonomy, in order to embrace a kind of unconditional attentiveness to the one we love.

It is perhaps these characteristics of love which have suggested to Christian thinkers, from the beginning, that it is God alone Who can really be loved – that is, only God can be loved with the fullness of desire and aspiration of which love is capable. The reason is that nothing created, nothing finite, not even another human being, can in the end sustain and justify the limitless desire to know and the surrender of autonomy which love requires. And I think that’s probably right. However exciting and absorbing other people can be for us, or art or nature can be, somehow our ability to love does seem to exceed them – even if we cannot live without them, as very many of us can’t. Perhaps those thinkers are right, after all, who claim that love only makes sense if, or because, God exists.

Leaving that to one side, however, and returning to our Lady, like all lovers she certainly understands something at the Annunciation, but not necessarily very much; she is surely more characterized by what she desires still to discover. We are told that she was frightened, and we are shown her asking questions, to which the answers can only have deepened her sense of the mysteriousness of what was happening to her. And like all true lovers, with the apprehension and the deepening of the mystery which she experiences, her attraction, her love, actually increases. Consider Gabriel’s words to her: “The Holy Spirit will come upon you and the power of the Most High will overshadow you; hence, the holy offspring to be born will be called Son of God.” In one way, the angel’s words shed new light. But equally, and just as importantly, they surely intensified in Mary a kind of un-knowing, a darkness and inscrutability, in what he was sent to convey. Both elements, the light and the darkness, are essential; in fact, they are inseparable. In Christianity light and dark, life and death, are always deeply interrelated; sometimes it is difficult even to tell them apart.

So what had Gabriel been sent to convey? Not primarily something to know, a proposition, to be understood and appraised. What he conveyed was something Mary was to undergo, something engulfing and strictly inconceivable: nothing less than the Incarnation of God. The Incarnation of God – which at one level certainly was the long-awaited fulfilment of a Divine promise, of which every pious Jew would have known and which would have interpreted in his or her own way; but which, at another level, was an utterly unsuspected, and unsuspectable, occurrence, to be mysteriously enacted, now, in the most intimate dimensions of Mary’s being.

This interplay, between what has, in some sense, been foreseen, and that which shatters and transforms all expectation, lies at the very heart of Christianity. And we can see it at work, here in the Annunciation, when Christianity commences. In her religious consciousness, in her self-understanding as a daughter of Israel, Mary would have been both prophetically alert to the coming fulfilment of all that God had promised, and yet her attunement would have found itself veiled by the impenetrability of how and when the fulfilment would come about. Gabriel’s words now brought her to that moment – unimaginable before it actually happens – in which what is believed begins to unfold into something real. But when this happens, there is also always something which seems to stretch possibility to breaking point, and even beyond. Was it likely, was it even thinkable, that the vast and momentous future which Israel had for so long obscurely but intensely anticipated was now to achieve definitive form? And not in some cosmic setting, or even in a very public way, but rather in Mary’s own body, in that secluded place of desire and arousal and consummation? How could that be?

Gabriel’s answer – which is, in effect, that God Himself would take her as His lover – is hardly an explanation, in the sense of affording her a rational basis for believing what he says. But it captures her. Her surrender comes from falling in love with the beauty of what the Angel shows. Some truths – perhaps any truth that really matters – can only be told in the form of something beautiful. Truth, in so far as it matters to us, must be revealed as something loved and desired. It touches us by completing us in ways which we inchoately recognize but which we could never have predicted, and which we cannot encompass even when we grow in knowing it.

Gabriel’s words, we can imagine, prompt a memory, and at the same time effect a sudden and overwhelming unfolding of what the memory contains. Mary recollects all that ardent, erotic language in the sacred writings of her own people, writings which she had heard and had frequently but inconclusively meditated upon. So this is what such language pointed to – God made flesh, dwelling among us because within us, an intimacy between God and ourselves which both reverberates with, and at the same time completely transforms, the deepest, the strangest and most unspoken, of our desires. It is the beauty of this which draws Mary in, bringing her to submit as one who loves submits. “Be it done unto me according to thy word.”