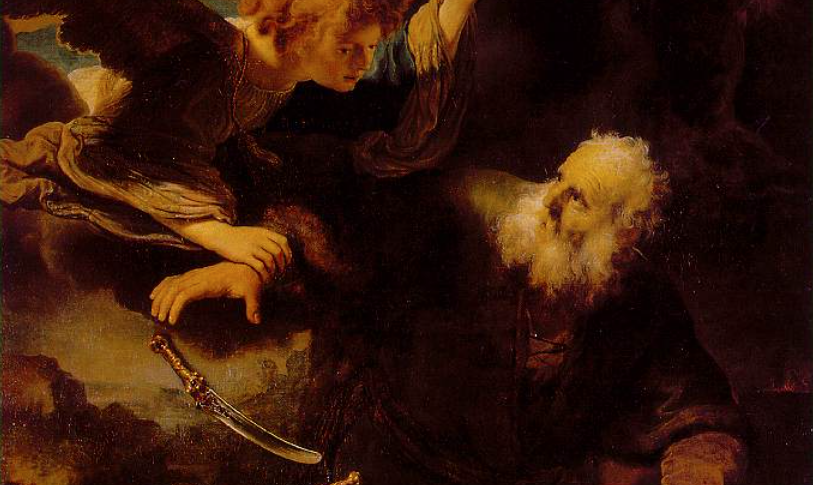 Are we to believe that God intended Abraham to kill Isaac? Some interpreters say so. God, they tell us, has the right to command such a sacrifice, and Abraham had the duty to obey. It was only because Abraham recognized this that God dispensed him from the obligation of obeying, and moreover repaid his readiness by promising him the blessing of descendants as countless as the stars of the sky. Interpreted this way, the story of Abraham and Isaac teaches, firstly, the absolute sovereignty of God over our lives, and secondly the requirement that we be ready unreservedly to submit to that sovereignty, even to the extent of being ready to kill, if that is what God asks of us.

Now on this kind of interpretation Divine mercy is subordinated to Divine justice. Abraham has first of all to acknowledge the justice of God’s command, before God, on condition of such acknowledgment, shows mercy by sparing Abraham and Isaac the ordeal that lies before them. God shows Himself first of all as insisting on what we owe Him, and this insistence is the prerequisite of any readiness He may have to mitigate our indebtedness. But are there indications within the story itself that this kind of interpretation is not quite right?

One such indication is this. Isaac, the sacrificial victim, speaks only once, but when he does it’s to ask a question redolent with the pathos of victims everywhere: where is the lamb for the burnt offering? Isaac maybe suspects that the lamb is himself, or perhaps he has no idea. But either way his question goes to the heart of the matter, and Abraham’s answer is accordingly momentous. What Abraham says is that God will provide himself the lamb for a burnt offering. We might think that this refers to God’s command that Isaac be sacrificed. But that command has already been made, whereas Abraham’s reply refers to something in the future: God Himself will provide. This implies that Abraham in some way anticipates that the sacrifice of Isaac will be replaced by something else. And in this anticipation we see a movement in Abraham himself. He moves from the stark obedience to Divine sovereignty with which He sets out on the sacrificial journey, towards a disposition of trust that God will bring about a merciful transformation of the harsh intransigence of the sacrificial order of things to which he finds himself bound. This movement towards trust doesn’t displace the centrality of obedience, but it does re-characterize it: no longer an obedience to inscrutable sovereignty, but an obedience towards love. And it is in accordance with this trusting anticipation towards God, I think, that Abraham is identified, in the New Testament and in the liturgy, as our father in faith.

And indeed a replacement for Isaac is eventually produced. Or rather, two replacements are produced. The first, immediate replacement is the ram, caught in a thicket by his horns; the second, more distantly but much more profoundly, is Christ Himself, the Son of God Whom God did not spare, as St Paul tells us in today’s Second Reading, but gave Him up for us all. Abraham’s answer to Isaac, that God will provide himself the lamb for a burnt offering, has in fact often been interpreted as a prophecy: not of the ram, of course, but of Christ, the Son of God, in Whose sacrifice all other sacrifices are rendered obsolete. Now in one way it doesn’t matter whether we say that Abraham here prophesies Christ or not: at the very least he seems to anticipate that God will not leave things as they are. But more important is that we, who as Christians must interpret the story of Abraham and Isaac, believe that Christ is in truth God’s definitive resolution of the sacrificial ordeal in which Abraham and Isaac are involved.

And what Christ shows us is that God does not demand sacrificial killing, even of rams, let alone of human beings. His justice is not shown in the requirement that we perform such expressions of our indebtedness. His justice is shown only in the sacrifice of Christ. And of course, in this sacrifice, it is not we who offer Christ to God, but instead Christ offers Himself on our behalf; and He does so not according to our indebtedness, but precisely as the cancellation of every debt in a renewal of all things according to charity. In Christ, then, Divine justice, God’s righteousness, shows itself only as charity: as the love that spares, forgives and empowers. Such love is alone the rule or measure that Divine justice proposes to us: and it fashions a new, redemptive, equilibrium, based not in the fulfilment of debts but in our merciful release from them. And this equilibrium, where the face of Divine justice is revealed definitively as charity, is the horizon according to which we have to interpret the story of Abraham and Isaac.

In light of this horizon, then, we are entitled to say that the story is a complex, multi-layered narrative. Specifically, Divine justice and Divine mercy seem not yet to have come together: they remain apart, apparently even opposed. On the one hand, the story is certainly framed according to the absolute justice of God in demanding Abraham’s sacrifice of Isaac. But within this frame, an intimation emerges that the frame itself is destined to be superseded. God will show Himself in the end not as demanding such radical expressions of indebtedness, but as Himself taking the place of the debtor, and thereby abolishing the whole conception of religion according to which our relation to Him is ruled by the obligation to repay what we owe Him. We might put it this way: the present of the story, in which Isaac is being sacrificed, also contains an anticipation of a future in which such sacrifices will have become definitively past. They will have been overcome because God will no longer be understood as demanding sacrificial victims, but as offering Himself in place of every victim, thereby definitively transforming the scene of sacrifice in accordance with the law of love. The difficulty we have as Christians in interpreting the story of Abraham and Isaac is, accordingly, that this future, only glimpsed in the story itself and not yet fulfilled, has become, for us, our enduring and definitive present. As Christians we can no longer contemplate any idea of sacrifice that does not participate in the self-sacrifice of the Divine Son. To this the sacrifice of Isaac may be said to point, but not yet to attain.

This, however, is only what we should expect. The Old Testament does not look forward to the New by fully unveiling it, but by wrestling with problems the answers to which it cannot simply and clearly foresee, even if it may sometimes glimpse the future towards which Divine Providence is tending. Such Old Testament glimpses, precisely because they are not complete unveilings, are typically embedded in conflicts which remain unresolved, where the past and the present contend with a future not yet decisively grasped. This is, after all, how grace very often figures in individual lives, and something analogous applies to the Scriptures, which enable us to discern the complex, tangled paths along which God leads His people, in order gradually to reveal to them Who He is.