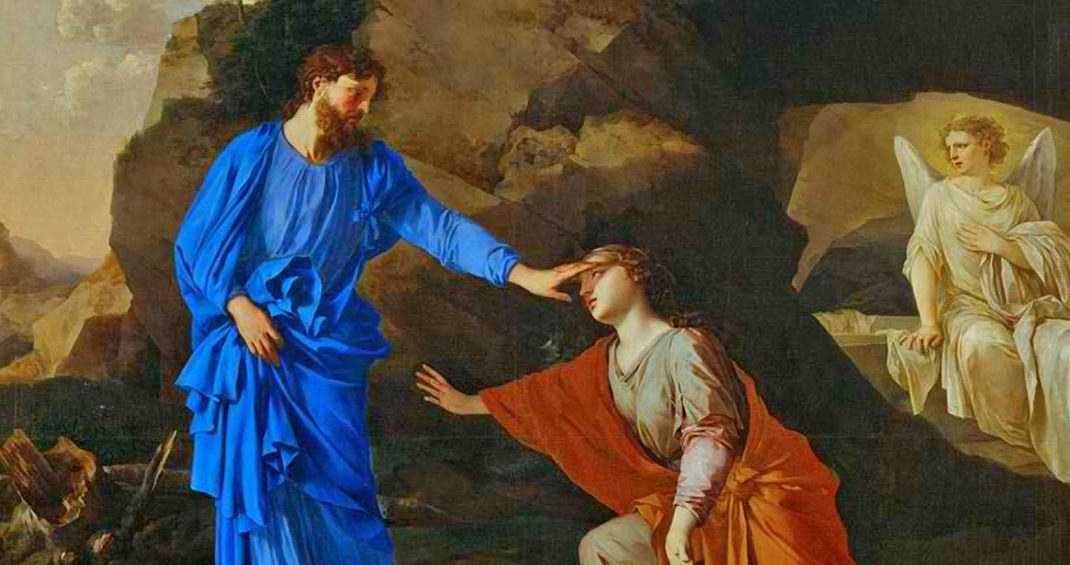 03 May Reflections on Touch, Part II

When the disciples first see the Risen Jesus among them, we are told that they are startled and frightened, because what they think they can see isn’t Jesus Himself, but a spirit. It is as if seeing cannot penetrate all the way to reality, but remains frozen, unconnected and apprehensive. It is only when Jesus extends His hands and His feet to their touch, that the distance imposed by seeing is overcome, and the truth of His being among them begins to become real to them.

Now it might seem as if this movement towards touch, although it closes the distance between Jesus and His disciples, opens it up between Jesus and ourselves. For if being able to touch Him is here  portrayed as the decisive experience of the truth of the Resurrection, then the Resurrection will seem to recede and become inaccessible to us, since the last thing we ourselves seem able to do is to touch Him. But although it seems obvious, perhaps this initial reaction is too hasty. Let us agree, just for the moment, that, unlike the disciples, we cannot touch Him. Even so, it may still be true that He can touch us.

And this certainly wouldn’t be an entirely unfamiliar way of speaking. We do say, for example, that certain people or works of art or situations have touched us, meaning that they have made themselves present to us in an especially intimate way: they have somehow got inside us, as we say, and stirred us from within ourselves. They may indeed be things that we have seen or heard, but saying merely that we have seen them or heard them cannot adequately evoke their effect upon us. We want to say that we have not merely seen or heard them, but that we have felt them, as if directly exposed to them, without anything intervening. It is then that we are moved to try to express ourselves by saying that they have touched us. And yet, at the same time, when we say that something has touched us we do not mean that its intimacy to us has caused it to be absorbed into ourselves. Despite its intimacy to us, we know that what touches us remains other than ourselves, even though we feel it within ourselves. Being touched is our most inward way of experiencing an encounter between ourselves and what is different from ourselves. In being touched, we feel, as a difference within us, the difference of the one touching us.

Now, with all this in mind, can we not also speak of being touched by the Risen Christ? Can’t we say that He sometimes touches us in prayer, for example, or perhaps in the Scriptures, in the inspiration given in a moment of contemplation or of being stirred to action, and again when He gives Himself to us in Holy Communion? Does He not also sometimes touch us through other people? None of these experiences of His touching us is easy to describe, of course. But then the experience of being touched is never easy to describe: it is too intimate, too immediate, to lend itself to being transposed into other terms. And yet it happens, and this is what impels us, impossibly, to try to speak of it.  So when Christ touches us, we might want to speak of feeling His presence to us as something too close to see or to hear. We may say that His presence arrives instead as a kind of movement that is within us but not of us. He veils Himself, silently and invisibly, in a nearness beyond seeing and hearing, according to a proximity which informs and directs our consciousness itself, prompting the thoughts we find ourselves having, the emotions we experience, the attention we are moved to pay. These arise as if imparted to us, as if touched into life within us.

The consciousness that the Risen Christ touches into life is therefore ours and His simultaneously: He touches us so that, in our own life, we can experience His. And what is the quality, the texture, of this consciousness? In the Gospel we recall that He gives Himself to His disciples by saying to them: See my hands and my feet, that it is I myself, handle me, and see… And we are told that when He had said this, He showed them His hands and His feet.  Now when He extends to them His hands and His feet He is offering them expressions of His own movement and agency: the feet with which He moved among us, the hands with which He reached out to hold and heal us. His hands and feet, then, express the vitality of His love. But of course they also express His passivity, His suffering, and this touches them too, in hands and feet especially marked by the wounds which love incurs.

And this, I think, tells us what kind of consciousness it is which He touches into life within us. It is consciousness shaped by His own charity. Under His touch we begin to think and desire and experience differently, in accordance with what St Paul calls the mind of Christ: which is to say, according to the whole course of His flesh, His action and passion among us, which now, through His touch, is to be reproduced in us. Extending to us His hands and His feet, He touches us with what He does, and with what He suffers, for the sake of love. He touches us with the hands and feet of His own doing and suffering, so that each of us, in his or her own unique way, can share in His pattern. The life of each one of us, under His touch, becomes a new way of sharing in the life that is His. And it is because of this, through His touching us, that our own experience can in fact rejoin the experience of His first disciples, and we can come to believe that He is Risen.