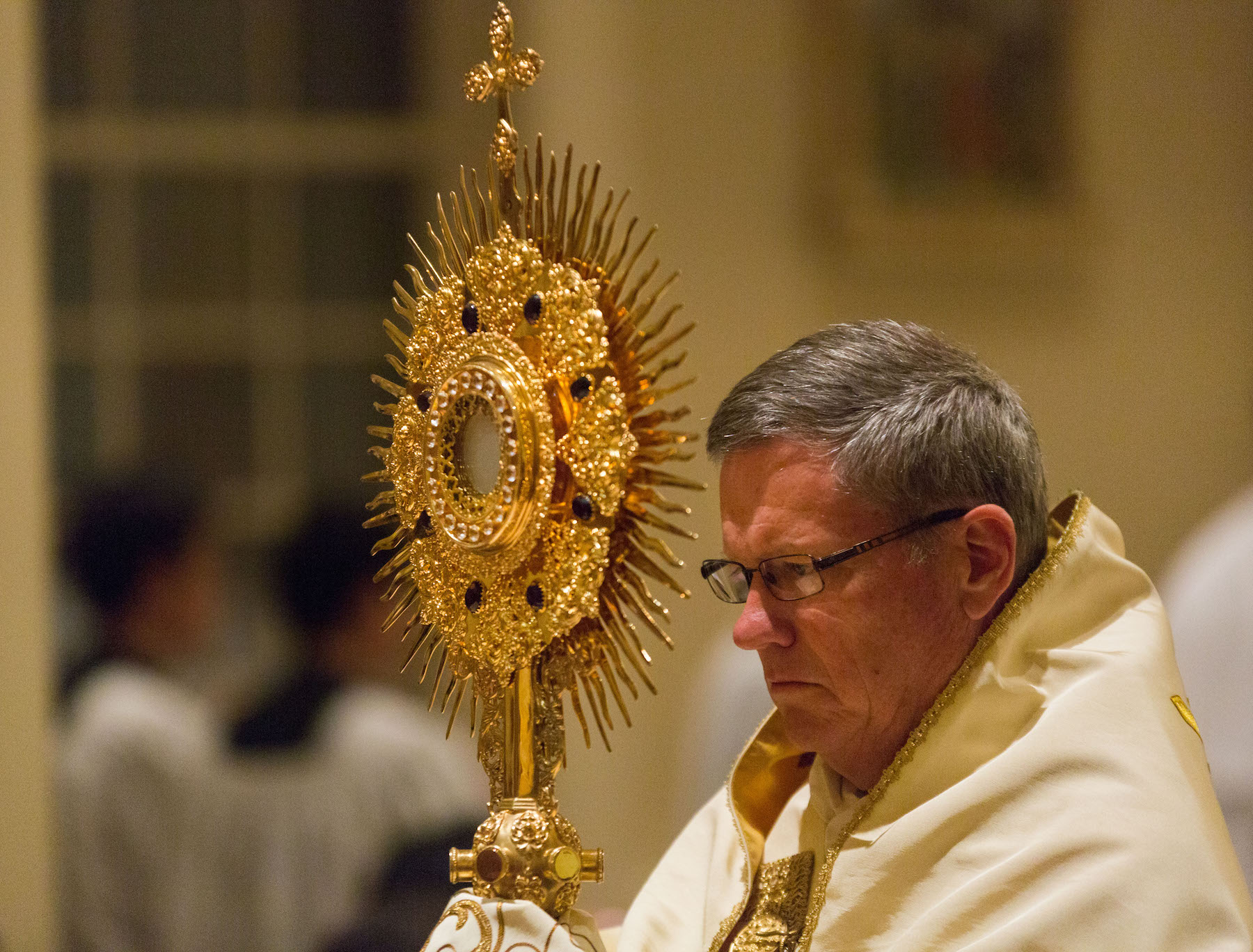 At the heart of every Mass lies the consecration. Bread and wine are changed into the Body and Blood of Christ. But if we are to try to think about this, there is something we have to bear in mind from the beginning. What exists before the consecration and what exists after it are not only very different things: they are things existing in very different ways.

The bread and wine, before they are consecrated, are present in the way in which physical things ordinarily show themselves to us. The Body and Blood of Christ, however, are not present to us, after the consecration, according to any ordinary way of being. His presence is real, but it lies entirely outside the field of appearance, beyond both hiddenness and disclosure. It is an extraordinary kind of presence, incomparable with any other kind. It is what the Church calls sacramental presence.

Now what does this tell us? It tells us that Christ takes the meanings which bread and wine have for us, and in taking them deploys them to communicate what He desires to be for us, and to do for us, when Eucharistically He gives us Himself.

But there is more than this. Although, in this sacrament, Christ enters into what is ours, by taking up the meanings which bread and wine have for us, He doesn’t only take up those meanings and use them, but He also transforms them. After the consecration, the appearances of bread and wine no longer mean only mundane nourishment; their meaning is mundane nourishment drawn into the meaning of Christ Himself.

The Eucharistic presence and agency of Christ, like the presence and agency of the Incarnation – which the Eucharist prolongs and communicates – consists in adopting human things, and through this adoption expanding and surpassing our understanding of the human, disclosing its potency for communicating God Himself. The bread and wine lose their mundane being; and yet their mundane being is not thereby erased, for their appearances persist, as meanings which call to mind the human as the place which Divine life has made especially its own. In the consecration, nature is disclosed in its openness to grace, human meanings to meanings that are Divine.

For example, we all think we know what food and drink are, what it is to share food and drink with others, what it is to enjoy the kinds of friendship and community which eating and drinking together can create and sustain. And in our awareness of this there is certainly a kind of moral imagination at work, a sympathy and a generosity, aspirations to patience and forgiveness and inclusiveness. But there is also of course much that is egocentrically narrow and self-serving, much that is defensive and exclusive, much that is prejudiced and contemptuous and even destructive. It is in the Eucharist that this ambivalence comes to light. When we think about what Christ promises and accomplishes in those whom, in the Eucharist, He nourishes with Himself, our failings are revealed and our sense of them deepened. At the same time our fragile aspirations to the good are clarified and strengthened, empowered to move according to new, unsuspected trajectories. So Eucharistic eating and drinking begins – as we say – where we are. But as we grow into this eating, everything gets re-conceived. Christ takes what is ours; but having taken it, He uses it, unforeseeably, to remake the world.

And yet, for all that, the Eucharist cannot be interpreted as a utopian scene. In the separate consecrations of the bread and the wine, and therefore in the sacramental separation of Christ’s Body from His Blood, we are drawn into a representation of His Passion and Death. He is present, in a single sacramental configuration, not only as one alive, Who desires to nourish us with the life that is His, but also as one who was slain, in solidarity with the death that is ours. We come to the Eucharist, then, seeking to draw on the nourishment and transformation which Christ promises; but at the same time we are, inextricably, confronted with His death, which means being confronted with our participation in the sin which made His death inescapable. The Eucharist, then, cannot be a site exclusively of consolation and assurance. A shadow of repentance informs our relation to it: the acknowledgment of a burden that only the gift of Divine love is able to overcome.

The Eucharist is, of course, rightly understood as pre-eminently the sacrament in which Christ draws His friends more and more intimately to Himself. But within that mystery, there is another, even more wonderful mystery to be discerned: the love and hospitality He shows to those who are estranged from Him.