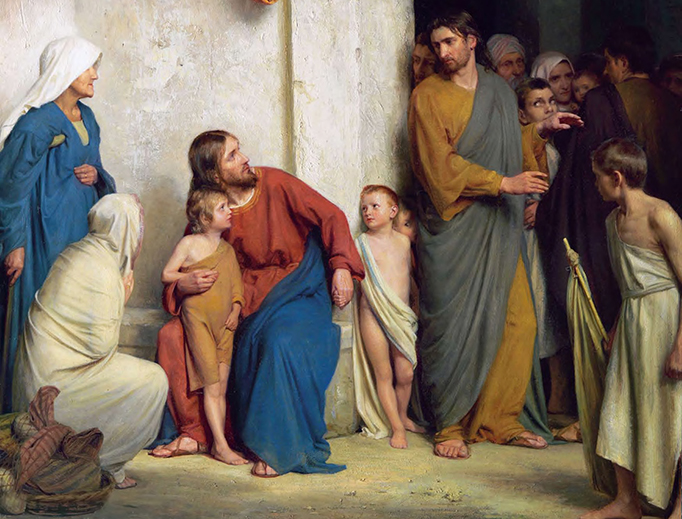 And He sat down and called the twelve; and He said to them, ‘If any one would be first, he must be last of all and servant of all.’ And He took a child, and put him in the midst of them… When Christ takes this child and shows him to the Twelve, what is it exactly that He wants to teach them?

First of all, I think we are meant to understand that He is responding to the discussion that we are told the Twelve had been having on the way to Capernaum, which when He had asked them about it they had been too embarrassed to reveal. Why were they embarrassed? What they had been discussing was the question of who among them was the greatest. From this we learn that they were already beginning to organize themselves as human groups tend to do, when left to themselves: hierarchically, according to relations of domination and subordination. Although, as a group, they were ostensibly configured around the person of Christ, their discussion about who was to be counted the greatest shows that they were in truth making themselves insensitive to the difference that He embodied in Himself and was attempting to communicate to them. This is why they were too embarrassed to tell Him about it. Instead of attending to the re-creation of human relationships which He was enacting in their midst, they were reverting to the old, familiar pattern of things, the way of rivalry and conflict, which in their hearts they knew to be a betrayal, a failure to heed the originality that was confronting them.

The truth that this originality isn’t a mere variation on established patterns of relating to each other, but requires a revolution in human thinking and behaviour, is shown by the starkness of the words with which Christ begins to respond to them, which appear paradoxical in their severity: If any one would be first, he must be last of all and servant of all. This teaching doesn’t mean that there is an alternative path to being first, that the desire to be first can be held on to but fulfilled in a different way. What Christ is telling them is that the desire itself must be surrendered. In the re-making of human relationships which He is accomplishing, there will be no such thing as being first, and therefore no space for desiring it. The whole pattern of order that extends from first to last is to be overcome. In its place there is to emerge a new pattern, a form of community in which ways of relating are lived out differently: not according to a desire to be first, but solely according to the desire of each to be of service to the others.

And it was at this point that we are told Christ took a child and put him in the midst of them. To see what this means, we have to understand that the child is not being presented to the Twelve as an example of innocence. As everyone knows, the ways in which children relate to each other are as marked by the instinct to dominate as adult relationships are. The point about the child is not that he is to be seen sentimentally, as somehow innocent of the desire to be first, but rather than he is to be viewed realistically, as incompetent to achieve what he desires. The child is incompetent because he is fundamentally weak and dependent, incapable of sustaining himself, always in need of care and assistance, essentially helpless. It is this, rather than any imagined innocence, which makes him exemplary. Christ is suggesting to the Twelve that they must come to understand themselves as resembling the child precisely in his incapacity.

But what is the connection between this childlike incapacity and the community of service towards which Christ is trying to draw them? I think the answer to this begins in recognizing that incapacity is not only the obvious truth of childhood, but is also the hidden truth of being an adult. We hide this truth from ourselves because we construct a vision of adulthood which is all about competence, strength, self-possession, achievement and success. We tell ourselves that this is what it means to grow up, to mature and make our way in the world: we must leave the weakness and dependency of childhood behind, and instead become self-reliant and self-governing, for only in this way can we compete effectively and establish ourselves securely. And so to be incompetent and ineffective, to be in need, to be helpless, seem to us marks of failure or of tragedy, things to be feared and despised. And yet of course they persist nonetheless: through our vulnerability to accident or illness, most obviously; but also through the complex effects that others can have on us, and in the intricate networks of interdependence, in family and friendship, in community and in society, that sustain us. In these and in many other ways, each of us is much more like a child than we find it comfortable to acknowledge. And above all, of course, we are like children before God: not at all innocent, and entirely unable to sustain ourselves in the paths of faith, hope and love along which He seeks to draw us. Here, much more even than in human relationships, we discover that self-reliance and self-governance are illusions. In relation to God we are incapable of adulthood, and must consent absolutely to a childlike incapacity and helplessness.

We must, in other words, consent to being loved. We must recognize that we are loved, not because of our achievements, not because we have proved ourselves worthy of being loved, but instead by accepting that God loves us notwithstanding all our incapacities and failures. God does not love us because we are innocent, or because we are responsible and successful, because He knows that we are not. He loves us, instead, with the love with which children ask to be loved – that is, with an unconditional love, given for no other reason than a delight in loving. Once we realize that this is how we are loved, then we are enabled to draw from that love in order to begin to love in the same way ourselves. Our desire to be first is a desire for a security in preeminence which is illusory: it hides from us our essential vulnerability and dependence, both in relation to each other and, above all, in relation to God. But once we realize that God’s love for us is unconditional, the desire to be first is exposed in its deceptiveness and irrelevance. It is from this exposure that we are enabled to cease fearing and despising human incapacity, both our own and others’. And this is what gives birth to the new community of mutual service of which Christ speaks in the Gospel.