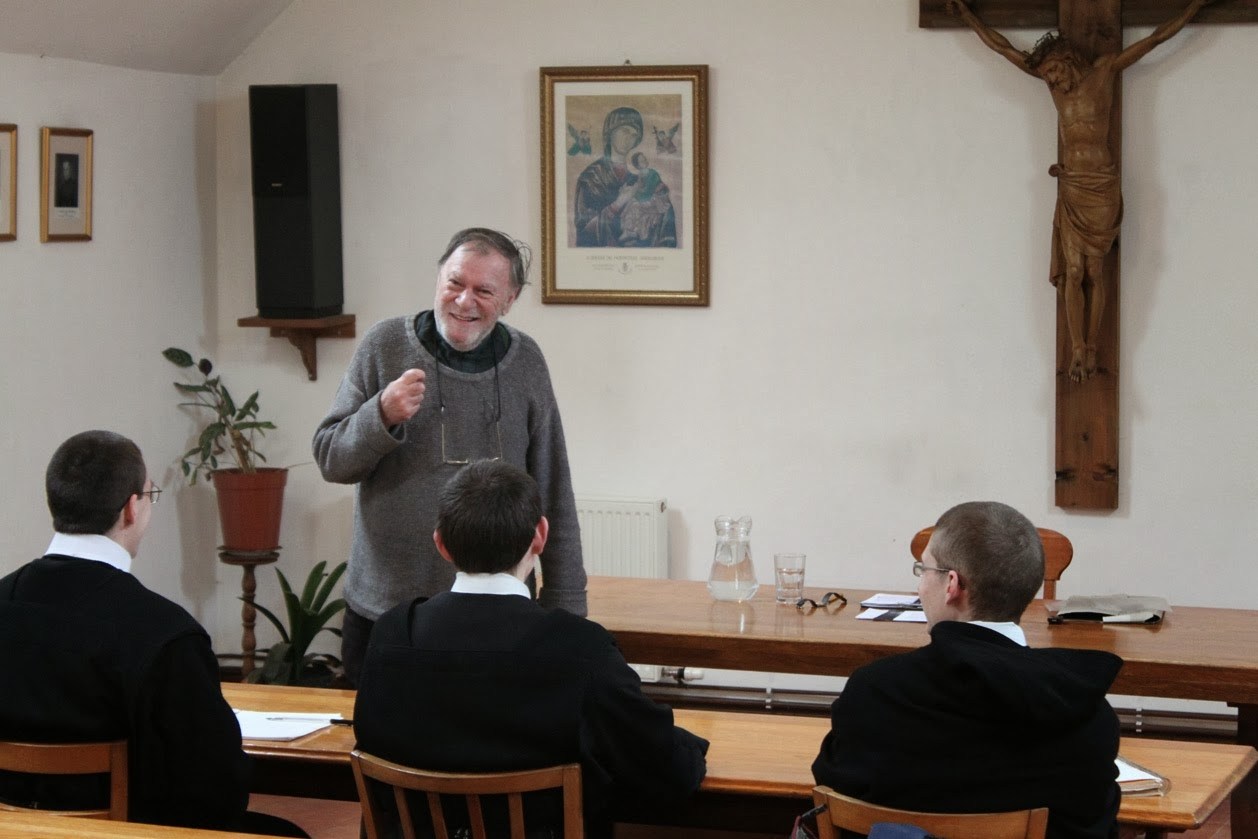 An anti-blogger or Idleposter is likely to read others, from idle curiosity if no better cause, and the commentarii diurni to which I first turn most days is Father Hunwicke’s Mutual Enrichment. Surely he is the world’s greatest Catholic blogger in English (mostly), though Hunwicke himself assigns the title of Archiblogopoiosto America’s Father Zed.

Once tired of here, gentle reader will find, there, a rich fund of learned and penetrating remarks on every passing liturgical, scriptural, patristic, doctrinal, homiletic, canon-juridical, historical and general ecclesial matter, along with fine classical asides, a typographical dog’s breakfast, and some good laughs. A man of Oxford and of the English Church, returned to Rome through the Ordinariate, I know him not, personally, yet am gobsmacked to think such a dinosaur still roams this Earth. And, as gentle reader may appreciate, “dinosaur” is my fondest praise.

Hunwicke lays it on with a trowel (the preferred tool of gardeners and Nehemiah), and with that glowering Oxonian glee, discernible in his photograph. Truth matters to him; the reputations of persons, not so much. Yet still he doffs his hat to the authorities, in the time-honoured mediaeval manner; doffs, as it were, what is lawfully owing to the office or chair, regardless of the clown who may be sitting in it; doing obedience, when necessary, with humour. (Saint Thomas More was like that: going to the block with a little joke to the axeman.)

Chiefly, Hunwicke has focused on the problem of repatriating Greater England to the Civitate Dei; which is to say, that City of God — contra Paganos. This is the task of bringing the best of the Anglican heritage of mediaeval continuity back into communion with the one, holy, catholic, and apostolic Church; and thus Lancelot Andrewes, Richard Hooker, Jeremy Taylor and the rest back into accord with Anselm, More, Newman. Et cetera.

The challenge here, or rather, part of the opportunity, is to grasp the significance, not only for England, and for every living English-speaking soul, but for the Catholic Church at large, of Anglicanorum Coetibus: the apostolic constitution with which Pope Benedict XVI began an extraordinary act of reconstruction, under the patronage (and guidance, I should think) of Our Lady of Walsingham. There was nothing casual in this; nothing small.

In the fullness of time, I think it will be seen that through this and his yet more important apostolic letter, Summorum Pontificum, Benedict began a process that can enable, practically, the restoration of Holy Church, after her period of wilderness desolation (which continues yet, in the shadow of Vatican II). However modest these measures may seem, in terms of the number of people who have seized upon the opportunities immediately presented, they are Pauline in their implications. Within a Church that is outwardly shrinking, and retreating from her contest with the Dictatorship of Relativism, there is a Heart that will grow and restore circulation to her re-animated parts.

To my mind, Hunwicke is among the few who fully understand these implications. Rome, post-Benedict, may be in many minds and much confusion, but the means, even the mechanisms for recovery are now there; and from many dispersed locations that recovery has begun.

Recovery of the Catholic heritage — spiritual, intellectual, and material — has many further dimensions. Currently, Father Hunwicke is drawing attention to another. He returns to the Regensburg address of 2006, so maliciously misrepresented in the media. In a series of three posts (beginning here) he reviews some of its actual content.

Benedict was also working on the recovery of the scriptural tradition: the Catholic understanding of what the Scriptures are, and of the nature of their inspiration expressed in historical time. The interested reader should study these posts carefully because something subtle is conveyed, easily lost on academics in the contemporary biblical field. In a phrase: there is no such thing as an “original text” of the Bible. The search through “textual criticism” is for a chimera. Such texts as the Septuagint, and the Vulgate, are independent witnesses — not for some antecedent texts that might be reconstructed by “getting behind them,” but instead, canonical in themselves.

And they are attested through actual use in ancient church and synagogue, as throughout the life of the early Church. They were intrinsic to that life, and the life was witness to them.

The texts are what they are. They are neither interchangeable nor manipulable. There is no “theory” that can aggregate then refine them into one homogeneous substance, like corn, barleyseed, and municipal waste into methanol. There are only the texts in themselves, uncontaminated by modern hypotheses and speculations. Take them or leave them. What lies behind is not some “primitive text” that had been “redacted.” No such thing is to be found. They contain what they contain, including all the bits sinful modern men would like to excise or revise.

Each, from its angle, stands witness — not to some lost textual history, but to the Christ.

Fixate upon that, and the penny may eventually drop. It is Christ we worship, not scholarly chimeras. Turn your attention from what does not exist, and therefore can never be proved, and take instead what you were given in that ancient “deposit of faith.” In other words, turn your attention from the vanity of human wishes, and look behind Scripture to Christ.

For that is what the Church has been teaching all along: come, to Christ, comprehensible through history, and actually Present in the Mass.

As Joan of Arc put it: “About Jesus Christ and the Church, I simply know they’re just one thing, and we shouldn’t complicate the matter.” (It was she, too, who stated with such beautiful clarity, that she did not know whether God loved or hated the English, only that they’d be kicked out of France.)

The effort to complicate the matter requires much complicated resistance. Father Hunwicke has a genius for disentanglement. It would be worth “following” him, if only for the entertainment of watching how he does it. Go follow. And then for godsake go to Mass, and apply what you have learnt.